The Wave and Energy Project (WEP+), a multinational research project into biofouling on offshore renewable energy platforms, has made progress on developing anti-fouling strategies set to boost the performance of marine energy technologies.

From the moment an offshore energy platform, such as a wind turbine or a marine energy device, is placed into the open water, chemical processes begin leading to the settlement and growth of marine organisms.

The process, known as biofouling, affects device performance and is extremely costly for companies in terms of maintenance, mitigation and in energy capture, according to Heriot-Watt University’s International Centre for Island Technology (ICIT), one of the project partners.

While biofouling has been a recognised problem for centuries, deployment of these technologies in the sea creates several unique issues.

Through the WEP+ project – funded by Ocean Energy ERA-NET Cofund (OCEANERA-NET COFUND) program – the partners from the UK and Spain representing industry, academia and the marine energy sector are working together to address these issues.

The research utilises surveys, settlement panels, and video imagery. It includes data collection and experimental testing of anti-fouling coatings in habitats targeted by these sectors.

The WEP+ project is using the facilities from La Escuela de Nautica de Santa Cruz de Tenerife where the biofouling structure was installed in July 2020 and the research will be running until October 2021, according to Scottish environmental consultancy Aquatera.

Also, the researchers from Heriot-Watt University’s ICIT are testing new anti-fouling and anti-corrosion treatments to determine which coatings can be applied to a structure in order to best deter organisms, such as limpets and barnacles, for a prolonged period of time.

Andrew Want, a marine ecologist from Heriot-Watt University’s ICIT, said: “The WEP+ project provides a valuable opportunity to study biofouling and test antifouling coatings. Biofouling varies between locations; strategies to best mitigate this problem may be improved with relevant knowledge of local species. There are deployments happening in habitats that we haven’t really studied so we don’t have a complete picture of what biofouling will occur. So we need to work out what coatings will work most effectively in these high wave or high flow habitats.

“Ultimately, we hope to provide evidence-based guidance to help the marine renewable energy industry in our societal aim to decarbonise electricity generation in an environmentally responsible way”.

Ricardo Souto, from Las Universidades de la Laguna (ULL), said: “Society faces major challenges while using energy and resources to minimize the resultant pollution associated to their deployment and limited service times due to environmental degradation. High-performance materials are developed for such applications which do not occur naturally in the earth’s crust, therefore requiring of protection strategies often involving hazardous chemical species for the marine environment.

“Exciting possibilities for the development of novel processes dramatically reducing the environmental impact by performing collaborative research between industry and academia are very challenging within the WEP+ project”.

Natalia Rojas, Project Manager at Aquatera, added: “This research is the first one of its category done for the MRE and offshore wind industries in the Canary Islands. The collaboration between the Scottish industry and academia, with large expertise in marine renewable energy and offshore wind, with the local academia in the Canaries has been extremely positive to support the development of these sectors in the archipelago”. 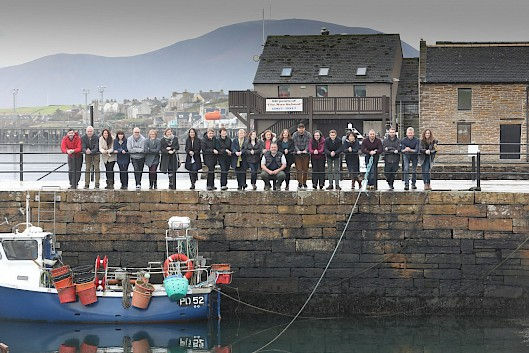