CMA CGM Trocadero, the eight LNG-fuelled, 23,000 TEU containership out of a series of nine giant boxships being built in China, has been delivered to French shipping major CMA CGM.

The colossal containership, spanning almost 400 meters in length and 61 meters in width, is the fourth and last vessel from the series to be delivered by CSSC Jiangnan Shipyard.

One more ship remains to be completed at CSSC Hudong-Zhonoghua Shipbuilding.

The ships are the world’s largest container vessels to run on LNG at the moment. They will feature WinGD’s dual-fuel engines and GTT’s 18,600-cbm fuel tank, both largest ever built.

They have a straight bow with integrated bulb, rudder and propeller with a redefined design that improves their hydrodynamics, thus reducing energy consumption.

The 23,000 TEU sister ships will be registered on the French International Register (RIF) and named after iconic monuments and landmarks in the French capital (Palais Royal, Louvre, Rivoli, Montmartre, Concorde, Trocadéro and Sorbonne).

CMA CGM Trocadero is set to leave China on May 29th, heading for Europe for its deployent on CMA CGM’s Asia-Europe service.

CMA CGM has set a target of becoming carbon neutral by 2050, and adoption of LNG as marine fuel plays a major role in that strategy. The company said earlier that it plans to own a fleet of 32 LNG-powered container ships by the end of 2022.

This figure is likely to increase further to over 40 ships following the latest order announced by CMA CGM at the beginning of this month.

The remaining ten 5,500 containerships that will be powered by VLSFO will be constructed by Beihai Shipbuilding.

These vessels are expected to join the group’s fleet between 2023 and 2024, CMA CGM said. The French liner major added that the order aims at accommodating market growth. 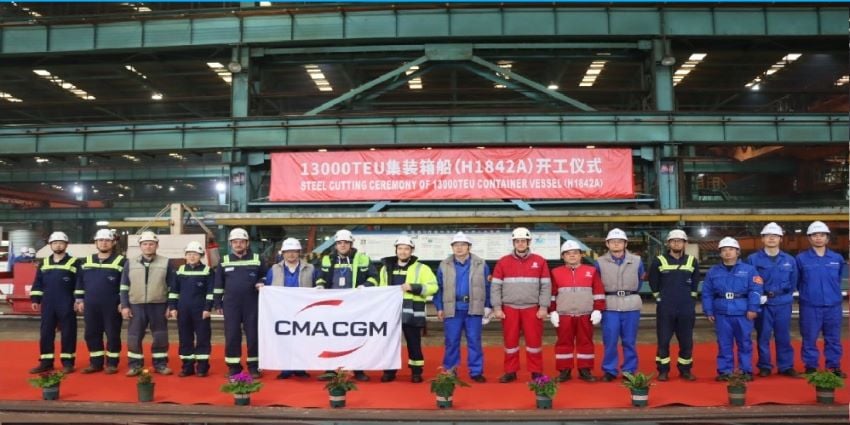