U.S. classification and technical advisory services provider ABS has revealed that Maersk’s new carbon-neutral methanol-powered fleet is to be built to ABS Class.

The vessels will be built by Hyundai Heavy Industries (HHI) and have a nominal capacity of approximately 16,000 containers. The total price tag for the new boxships was KRW 1.65 trillion (US$1.4 billion).

The series will replace older vessels, generating annual CO2 emissions savings of around 1 million tons and offer carbon-neutral transportation at scale, according to the company.

Furthermore, the containerships, which will be capable of operating on carbon-neutral e-methanol or sustainable bio-methanol, will feature a dual-fuel engine setup, to enable operation on conventional low sulphur fuel.

“More than anything, decarbonizing shipping requires collaboration and innovation across the ecosystem, so I am pleased to have ABS and its leading expertise with us on this journey,” said Palle Laursen, Senior Vice President, Chief Technical Officer of Maersk.

“Our methanol-fueled vessels will play a significant role in reaching our commitment of 60 percent CO2 fleet reduction by 2030 compared to 2008 levels.”

“Sustainable global trade is an urgent priority not just for our industry, but the entire world,” said Christopher J. Wiernicki, ABS Chairman, President, and CEO.

Both the methanol-fueled feeder vessel and the decision to install dual-fuel engines on future newbuildings are part of Maersk’s ongoing fleet replacement plans.

In line with its decarbonization strategy, Maersk aims to have commercially viable, net-zero vessels on the water by 2030, and to deliver a 60% relative reduction in CO2 emissions by 2030 compared to 2008 levels. 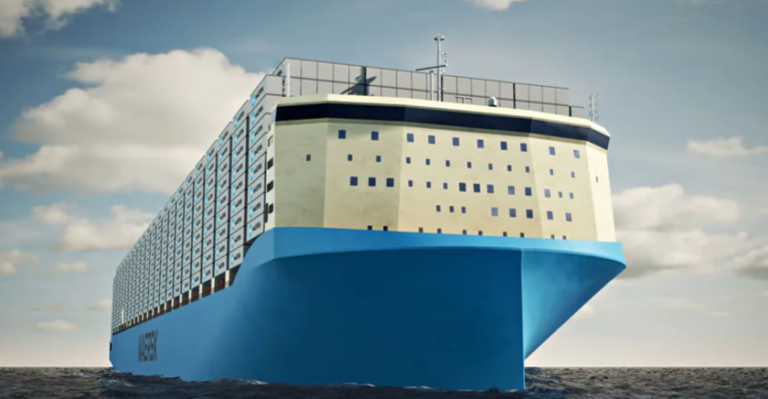