Off the coast of Spain subsea services company ACSM has completed sea trials of a second Saab Seaeye Cougar XT ready to add to their ROV fleet.

This follows successful trials offshore Norway and in the Baltic where ROV pilots and technicians reported minimal downtime and satisfaction with its performance.

Operating near the Port of Ferrol, Spain, the 2000 metre-rated Cougar undertook a range of free-swimming tests including survey routes, manipulator intervention on structures and other wet tests.

An additional test included a collaborative venture with Portugal-based Abyssal, trialling their 3D visualisation system that uses Augmented Technology to provide the pilot with a ‘heads-up’ display in 3D showing flight paths and checkpoints to guide the pilot to the exact target location.

For pilots the unrivalled manoeuvrability of the Cougar XT is a key feature, coming as it does from six thrusters, each having velocity feedback for precise control in all directions, with a control system that makes it more responsive than any other ROV on the market.

Spanish-based ACSM sees this as an important attraction along with the other unrivalled capabilities of the small yet powerful Cougar concept.

These include a reputation for reliability and versatility and an ability to carry out light work-class jobs, along with survey tasks and the easy fitting of a wide variety of sensors, ancillary equipment and tooling for tasks such as drill support, salvage and IRM.

ACSM intend to make the Cougar XT available to clients, not only as a free-swimming option, but as a ‘back-up’ vehicle for ACSM’s other TMS housed Cougar where long projects or difficult offshore areas would make any quick ROV replacement a challenge. 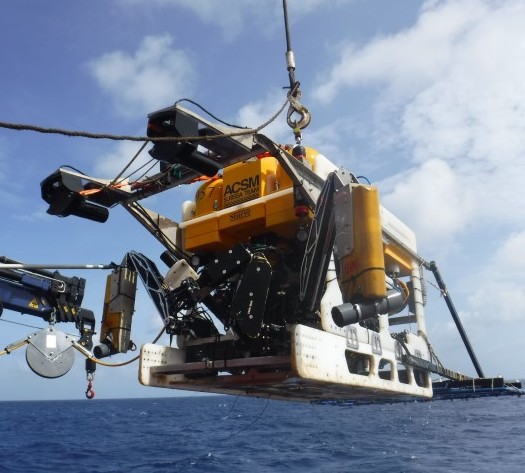