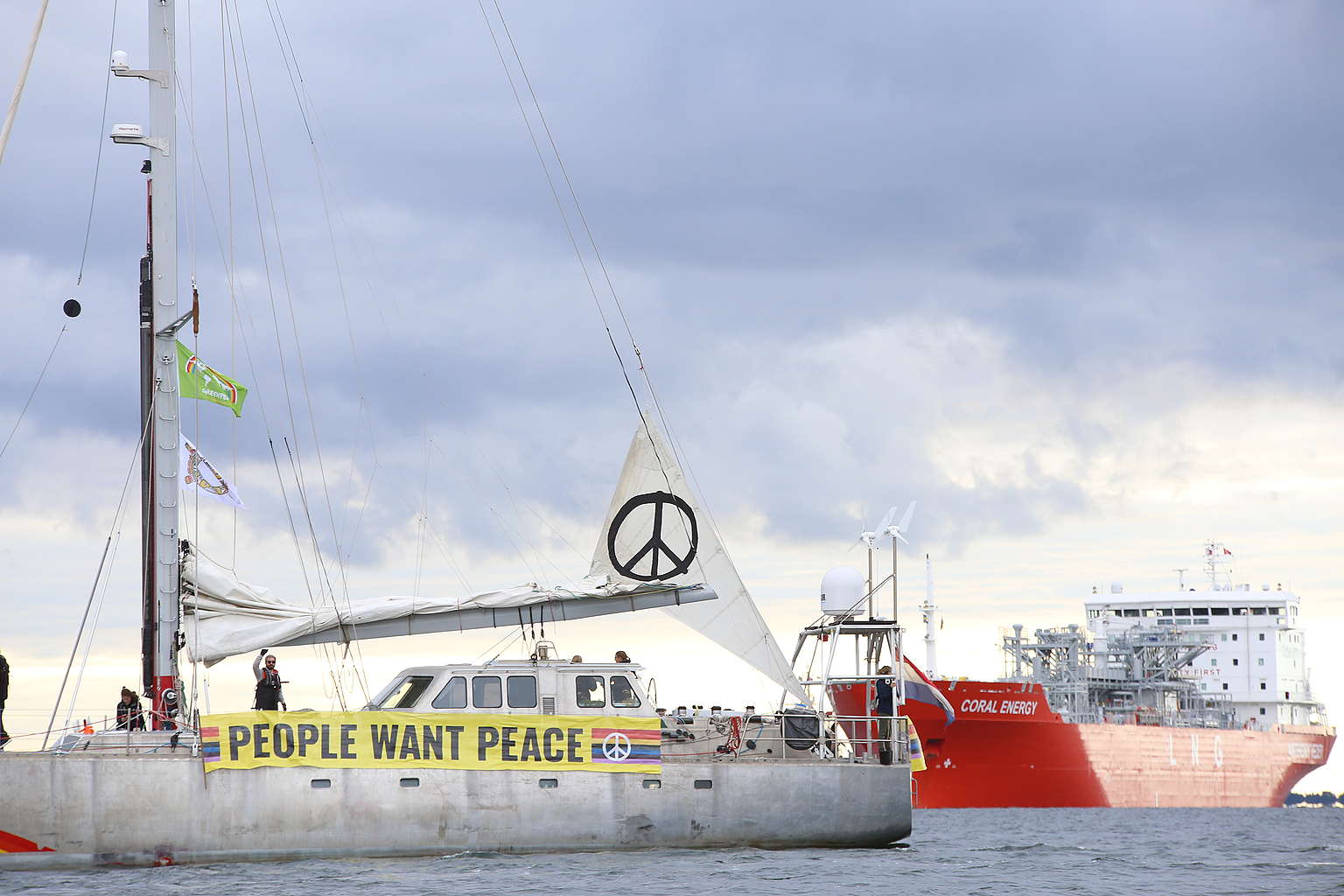 Back to overview
Home Fossil Energy Activists block Russian gas from being unloaded in Sweden, calling on govt to ‘impose an immediate import stop’

Activists block Russian gas from being unloaded in Sweden, calling on govt to ‘impose an immediate import stop’

Activists from Greenpeace Nordic have blocked a gas tanker carrying Russian gas from offloading its cargo at an LNG terminal in Nynäshamn, south of Stockholm, calling on the Swedish government to stop the imports of Russian fossil fuels due to the war in Ukraine.

The environmental group revealed on Thursday that its activists stopped the Coral Energy tanker from offloading its cargo of Russian fossil gas at an LNG terminal in Nynäshamn on 8 September 2022 thanks to climbers, which occupied the cranes that unload the gas from the ship while Greenpeace sailing vessel SY Witness and activists in kayaks were in the water to prevent the ship from docking.

The activists called on the Swedish government to “declare an immediate stop to the import of Russian fossil gas.” Greenpeace explained that Sweden has received around 100.000 cubic meters of LNG from Vysotsk in Russia since the Ukraine crisis started. Even though Sweden has a clear mandate from the Swedish people and an announcement from the Parliament to stop importing Russian energy, the country continues its imports, financing the Russian military, according to the environmental group.

Commenting on this, Karolina Carlsson, campaign leader at Greenpeace Nordic, remarked: “The fact that Russian fossil gas is still allowed to flow into Sweden, more than six months after Putin began his invasion of Ukraine, is unacceptable. The Parliament has given the Swedish government a clear mandate to stop all imports of Russian energy to Sweden and it is Prime minister Magdalena Andersson’s obligation to act on this.”

Furthermore, Greenpeace estimates the value of the Russian gas that has been imported to Sweden during the first six months of the war to be approximately SEK 1.7 billion (over $161 million), adding that the Finnish state-owned Gasum – which supplies Swedish gas stations, ferries and petroleum companies – has regularly imported gas from Gazprom and Novatek in Russian Vysotsk to Sweden and Finland. The activists claim that this was done sometimes directly, but more recently, via a more intricate arrangement where the gas is first transshipped to other vessels at sea.

Nadia Shevchenko, Ukrainian journalist and environmental expert who was on board the Greenpeace sailing vessel Witness in Nynäshamn, stated: “I am extremely grateful for all the support that Sweden has given to Ukraine in these dark times for my country. At the same time, it is incomprehensible to me how Sweden’s government can support Ukraine with one hand and with the other finance Putin’s invasion and the abuse of the Ukrainian people by allowing these imports of Russian fossil gas to continue.”

Moreover, Greenpeace underlined that a shipload of Russian gas from Vysotsk is estimated to be worth over a quarter of a billion Swedish krona when it leaves Russia, which is “equivalent to almost four advanced Kalibr missiles or about 80 of the older Tochka-U missiles, weapons systems used by Russia in Ukraine.”

In an update on Friday, Greenpeace disclosed that its activists have managed to get the gas tanker Coral Energy to turn around and set course for the Baltic Sea again, elaborating that its activists in the cranes at the gas terminal were taken down by the police late yesterday afternoon while the Greenpeace sailing vessel Witness continued to anchor outside docks.

However, at 5:30 on Friday morning, Swedish police took over the vessel and moved it out of the way. The environmental group underlined that it now “hands over the task of stopping the Swedish imports of Russian gas fuelling Putin’s invasion of Ukraine to the Swedish government.”

“Greenpeace is doing what Magdalena Andersson and the government have failed to: to stop the flow of Russian fossil gas that finances the war in Ukraine from entering Sweden. It is not reasonable to help Ukraine with one hand and finance Putin’s invasion with the other. Now that we can no longer be on site, it is the government’s responsibility to impose an immediate import stop for the Russian gas,” stated Carlsson.

The protest in Sweden comes after similar protests took place in Norway and the UK. In April 2022, Greenpeace activists blocked the oil tanker Ust Luga, preventing it from offloading Russian oil into the port and called on the Norwegian government to ban the import of Russian fossil fuels.

This was followed a few weeks later by a protest in the UK, when the activists blocked a Russian oil tanker from docking in Essex, England, calling on the government to “get off Russian oil and gas.”