Much has changed since Alfa Laval launched the Fuel Conditioning Module, or FCM, in 2001. Booster systems today must deal with more fuel parameters than ever before, while providing the same safety and even greater energy efficiency. Alfa Laval’s new FCM One promises all this and more.

Booster systems adjust fuel to the flow rate, pressure and viscosity specified by engine manufacturers. When Alfa Laval launched the original Fuel Conditioning Module, it provided a compact and flexible way of securing these targets. But times have changed, and so has the FCM.

On show at Marintec China, the new FCM One is similar at a glance to its predecessor. Behind the familiar appearance, however, lies a great deal of change. “The FCM One combines the strengths of the original Fuel Conditioning Module with new advantages and a completely new level of flexibility,” says Paolo Golla, Alfa Laval Product Manager Fuel Conditioning Systems.

An integrated module with many options

What sets the FCM One apart is the ability to integrate heating functions, cooling functions and much more into the same module, driven by the same controller. In its standard version, the FCM One filters the fuel and regulates its viscosity, pressure and flow. But for vessels working with multiple fuels, blended fuels or more advanced requirements, a broad range of additional functions can be integrated.

“Whatever the configuration, the FCM One is a single module with a compact design and a simple touchscreen interface,” says Golla. “Though the FCM One meets different needs without under- or over-delivering, it’s very much one system – with one frame, one logic and one-point access to any function.”

One module for many needs

The FCM One’s unified approach is both a contrast and an answer to the diverse needs of the market. When the original FCM was launched, HFO was the obvious choice and energy efficiency was not an issue for most. But with today’s emissions legislation and high fuel prices, most vessels have at least two fuels on board and serious concerns about energy consumption.

Though scrubbers allow the continued use of HFO, other fuels may be needed when discharge limits cannot be met and the residuals cannot be stored on board. Moreover, fuel suppliers have suggested that access to certain fuels may be limited in the future. This creates a need for options that was the focus of FCM One development.

The finished FCM One is prepared for the full range of fuel challenges today. With its multiple configurations, it gives ship operators the flexibility to work with any fuel available. Likewise, it comprises specific options for improving energy efficiency.

The challenge in switching fuels

Dealing with multiple fuels on board is trickier than it sounds for a traditional booster. Temperature shocks and low viscosity at the engine inlet are typical booster failings. Likewise, a traditional booster offers no indication of which fuel is in use when entering an Emission Control Area (ECA).

Because engine protection and efficiency depend on the correct temperature and viscosity of the fuel, effective control of fuel parameters is critical. But during fuel changeover, the viscosity of lighter fuels is notoriously hard to maintain. Even creating a smooth and controlled temperature transition can be difficult, especially when unpredictable seas or unforeseen operating conditions force a change in engine load.

Since 2009, Alfa Laval has offered the ACS – Advanced Cooling System – to drive the changeover between HFO and distillates. But there are significant advantages in the FCM One’s ability to integrate cooling functions with heating functions and support for multiple fuels. Having all this in a single system not only saves space and installation hassle, but also allows greater efficiency in process control.

The FCM One handles automatic changeover with a single controller and a unified algorithm, which takes into account the system’s internal volume. This means excellent viscosity control, resulting in smooth and continuous ramping at any engine load. “The viscosity is kept in a tight range as the temperature changes,” Golla explains. “Since there are no viscosity fluctuations to trigger alarms and slow down the process, the result is a shorter changeover where less expensive distillate is consumed.”

Fuel blending on board

In addition to switching between fuels, many vessels today are meeting sulphur emissions targets by blending their own fuels on board. Even this process can be integrated into the FCM One, which then calculates and mixes the ideal blend. “This makes it easier to create an economical match for ECA requirements,” says Golla, who emphasizes that the FCM One also manages the changeover to and from the blend.

Using the defined fuels available on board, the FCM One determines the blend as a new fuel based on the given sulphur target, along with the changeover procedure from the fuel currently in use. All that remains for the operator is a manual check of fuel compatibility, which is prompted by the FCM One and must be confirmed before changeover begins.

No matter which fuels or blends are used, the FCM One can provide everything needed to demonstrate compliance with MARPOL regulations. Among the FCM One options is an electronic Fuel Record Book, which simplifies interaction with relevant authorities.

The option makes documentation easier by recording fuel and changeover parameters, together with a time stamp and GPS data. This information can then be printed or exported digitally in a secure, read-only format.

An opportunity for greater energy efficiency

Of course, emissions compliance is not the only concern when it comes to fuel management. Ship owners and operators are also looking for energy efficiency, which is yet another area where the FCM One excels.

The FCM One combines high component efficiency with needs-based equipment sizing in line with today’s needs. But perhaps more importantly, it arrives swiftly at target values without spikes or oscillation. “Quickly zeroing in on the correct values has always been an FCM strength,” says Golla. “In the FCM One, the new algorithm makes the process even faster, which means faster arrival at the best parameters for engine efficiency.”

In addition, the FCM One offers options to further reduce energy consumption. One is VFD-based control of the fuel supply pumps, which enables a direct reduction by minimizing their energy use when slow steaming.

Equally important is the possibility of indirect savings, which can be achieved through engine-specific monitoring of fuel consumption.

Engine-specific monitoring of fuel consumption is a feature that has long been requested by ship owners and operators. While not related to the engine’s efficiency per se, it quickly indicates when engine efficiency losses occur, which allows immediate action to be taken.

Up to now, this obvious benefit has been difficult to achieve. Even fuel mass flow meters are influenced by the pulsation of pressure created in the pipework by the fuel injection system, which causes a slight backwards and forwards movement of the fuel. This movement affects measurement, since some fuel passes through the measurement device with each pulsation.

In the FCM One, this difficulty has finally been overcome. The pulsations of the injection system are taken into account, which allows an accurate measurement of the flow through the engine. It is thus possible to detect increasing fuel consumption at an early stage, giving the ship operator accurate control over the vessel’s primary cost.

For Niclas Dahl, Alfa Laval Market Manager Marine Energy, the energy aspects of the FCM One are among the most exciting. “Engine efficiency improves when the booster reaches target values quickly, which the FCM One does even better than its predecessor,” he says. “But the pump control and engine-specific monitoring of fuel consumption create opportunities to optimize energy efficiency elsewhere.”

As Dahl sees it, these options allow a stronger integration of the fuel line that can prove as valuable as the integration of the booster module itself. And in this way, the new FCM One fulfils two key Alfa Laval goals. “On the one hand, the FCM One lets us adapt to growing diversity in fuel handling requirements,” Dahl says. “But just as importantly, it’s a key step in creating a more adaptive and efficient fuel line.” 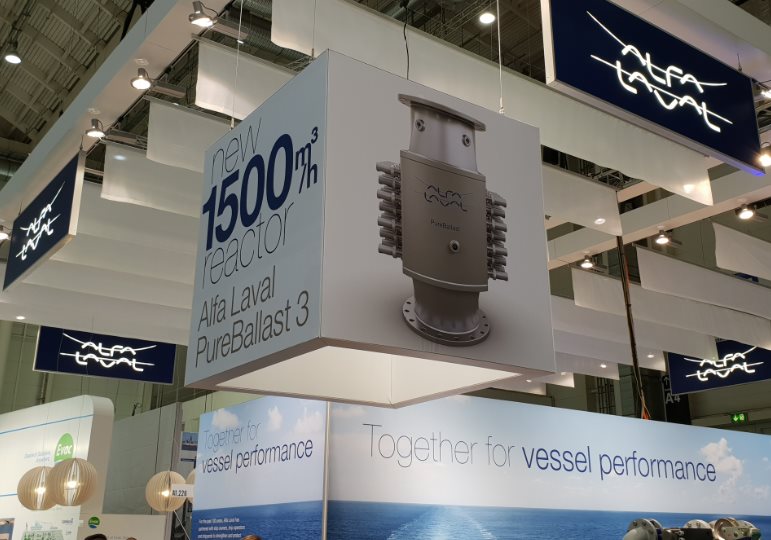