Antrim Energy will not be able to submit the revised development plan for the Fyne field in the UK North Sea in time.

To remind, the company in late March 2013 said it would not proceed with development of the Fyne Field using an FPSO. This followed a significant escalation of expected future development costs.

In February this year, Antrim was granted permission by DECC to amend the terms of UK Central North Sea Licence P077 Block 21/28a to allow for a Field Development Plan (“FDP”) for the Fyne Field to be submitted no later than 31 August 2014.

Subsequently, Enegi informed that the development solution chosen for the Fyne Field had been altered from the production buoy to the Self-Installing Floating Tower (‘SIFT’), a solution available to ABTOG through its strategic partnership with GMC Ltd.

In its 1H 2014 statement issued today, Antrim said that the Field Development Plan will not be prepared in time to meet the August 31, 2014 submission deadline of DECC.

“Interest from the UK government in the development of smaller fields in the UK North Sea has given the Company some encouragement, specifically with respect to the time required to bring these fields to development and the Company is in discussion with DECC regarding a possible extension to the Fyne licence terms,” Antrim said in a statement.

The Fyne Field Development draft plan involves installing a normally unattended self-installing floating tower (SIFT), which includes a foundation, a hull structure, and topsides, and drilling two production wells and one water injection well from a jack-up drilling rig positioned adjacent to the SIFT. Oil from the Fyne field will be separated from gas and water on the SIFT topsides.

Produced water from the development will be treated, then discharged to sea via a dedicated caisson. The oil will be stored in the legs of the SIFT hull and transferred to shuttle tankers for transport onshore to a refinery. Produced gas from the Fyne field will be used to fuel the SIFT turbine generators, with the excess produced gas disposed of via flaring.

Antrim forecasts that the proposed development of the Fyne Field will recover 13.5 million barrels (bbls) of hydrocarbons from the NW Fyne and Central Fyne reserves. The field is located on the Western Platform of the UK sector of the central North Sea. The Fyne Field lies approximately 10 km southeast of the Guillemot West and Guillemot NW fields, and approximately 15 km south of the Pict and Saxon fields. 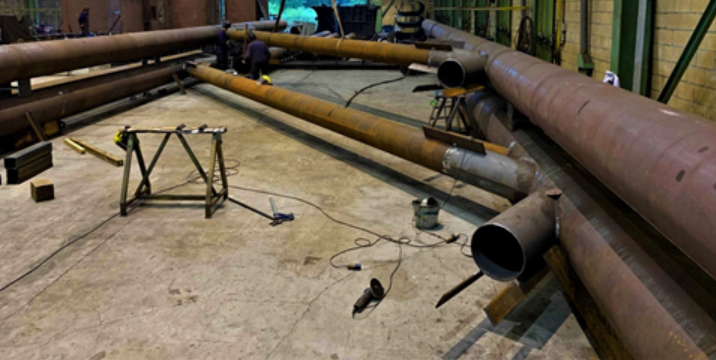