The Danish Environmental Protection Agency has informed Energinet that the Baltic Pipe project can resume construction works in certain parts across Denmark despite the repeal of the environmental permit.

To remind, Energinet enacted a temporary shutdown of construction following the ruling from 31 May from the Danish Environmental and Food Appeals Board to repeal the environmental permit for the Baltic Pipe project.

The Danish Environmental Protection Agency has now stated that it has no objections to Energinet’s plans to resume construction on parts of the project.

The construction on the pipeline on the western part of Funen and the eastern part of mainland Jutland from the existing compressor station in Egtved to the Little Belt strait will be stopped until a new environmental permit has been issued. Construction on the electrical supply to the compressor station at Everdrup will also have to wait for a new permit.

Energinet expects that the overall project will be delayed three months, but that it will be able to deliver a large part of the agreed-upon capacity by October 2022 working towards delivering full capacity by the end of the same year.

“We are working very hard to finish as much as possible to be able to deliver a large part of the agreed upon capacity by the original deadline,” said Marian Kaagh, vice president of projects at Energinet.

“Baltic Pipe is an important project for Denmark and for energy supply in Central- and Eastern Europe, but we are fully aware that most landowners would rather that the project did not affect them. We need to thoroughly calculate all of the consequences. When we have a full overview, we will share this with the public, says Marian Kaagh.”

The 274-kilometer Baltic Pipe project is a strategic infrastructure project between Poland’s GAZ-SYSTEM and the Danish Energinet.

The project will create a new corridor supplying natural gas from Norway to the markets in Poland, Denmark and also neighboring countries. 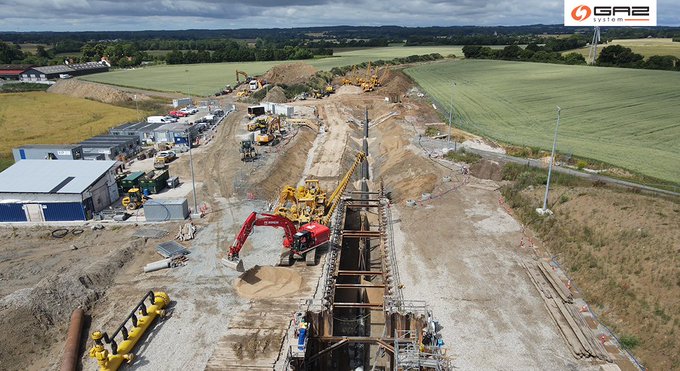