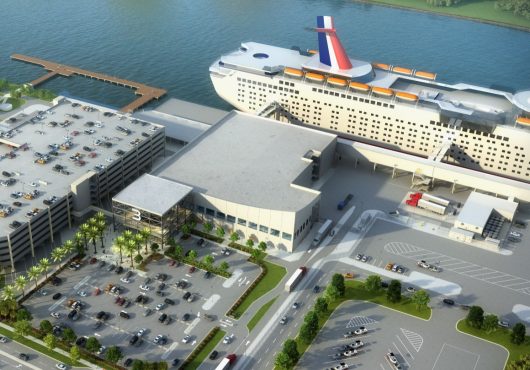 Canaveral Port Authority and its cruise partner Carnival Cruise Line ceremonially marked the start of construction of the new Cruise Terminal 3 complex as they broke ground for the facility on March 18.

Dubbed the Launch Pad, the new terminal will be home to Mardi Gras, the cruise line’s newest ship.

The USD 163 million terminal is scheduled for completion in May 2020 and will be ready for the arrival of Mardi Gras to Port Canaveral.

The contract to build the facility and adjacent six-story parking garage was awarded to Merritt Island, Florida-based Ivey’s Construction.

Construction of the cruise terminal’s marine facility got underway last year with a contract awarded to RUSH Marine to remove the existing pier structures at the site and build a new 1,309-foot-long berth for Mardi Gras.

Once it arrives to Port Canaveral, Mardi Gras is scheduled to start year-round seven-day cruises on Oct. 24, 2020, alternating weekly to the Eastern and Western Caribbean.