The FPSO is being constructed by Keppel Shipyards in Singapore. It is being converted from a very large crude carrier (VLCC). SBM Offshore will lease the FPSO Liza Destiny to Exxon for oil production at the Liza field 200 kilometers offshore Guyana.

In a statement on Wednesday, CCI said that the order value of was 4 million euros ($4.93 million).

Gianpaolo Brambilla, CEO of CCI-CableService, said: “This new important FPSO project award confirms our long-term relationship with SBM Offshore Group, and is the recognition by the market of the high quality profile of our marine & offshore electrical cables.”

According to the company, deliveries on site are estimated to start by the second part of March.

The Liza FPSO will be owned and be operated by SBM Offshore. The company completed the $720 million project financing for the FPSO back in December 2017. The lease and operate contract for the Liza FPSO includes an initial period of ten years with extension options up to an additional ten years.

The conversion phase began in November 2017 with the tanker arrival at Keppel shipyard, while Dyna-Mac kicked off the construction of the topsides for the FPSO in January.

Once completed, the topside will be mated aboard the VLCC Tina, currently undergoing conversion in Singapore.

ExxonMobil plans to bring the first phase of the Liza field online in March 2020. The company has also revealed plans for phase two of the Liza development.

The development concept for the second phase includes a larger FPSO and subsea systems. Liza Phase 2 FPSOs production capacity would be 220,000 barrels of oil per day with start-up expected by mid-2022.

As for the Liza Destiny, the FPSO is designed to produce up to 120,000 barrels of oil per day, will have associated gas treatment capacity of circa 170 million cubic feet per day and water injection capacity of circa 200,000 barrels per day. The converted VLCC FPSO will be spread moored in water depth of 1,525 meters and will be able to store 1.6 million barrels of crude oil. 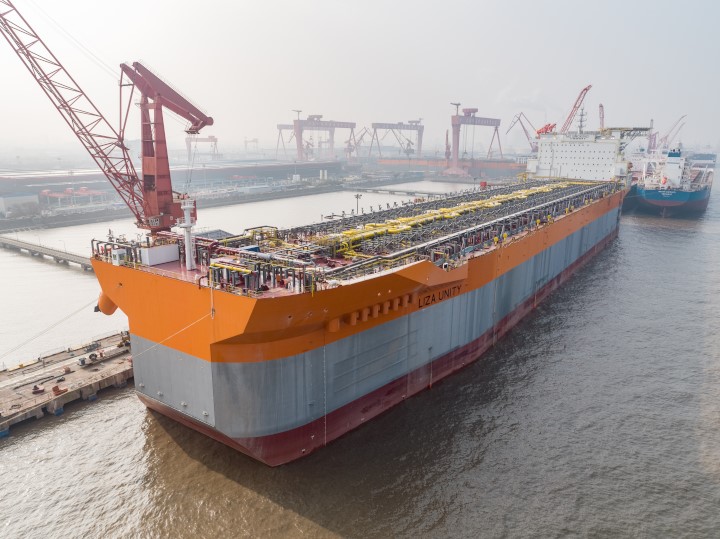