During the two following days, people in Bergen and Stavanger are invited aboard MS Bergensfjord before the ship embarks on its first sailing with passengers. Fjord Line will offer daily departures between ports in Norway and Denmark starting on Monday 17 March.

“We are proud and grateful to have the Mayor of Bergen as the godmother of our brand new cruise ferry. MS Bergensfjord will join her identical sister ship MS Stavangerfjord as a regular visitor to the ports of Bergen, Stavanger, Langesund and Hirtshals. Before regular service begins however, there will be major celebrations in Western Norway’s two major cities,” says CEO Ingvald Fardal.

Fjord Line’s two new environmentally-friendly cruise ferries have been built at Bergen Group Fosen. As a result of excellent progress in the completion of MS Bergensfjord, Fjord Line can move forward the planned start of sailings with two ships by two and a half weeks. MS Bergensfjord embarks on her maiden voyage with passengers from Stavanger on Sunday 9 March.

Meanwhile, MS Stavangerfjord will have scheduled warranty work completed and both ships will be in full service from Monday 17 March with daily departures from the three ports in Norway and Hirtshals in Denmark.

“We are celebrating the early completion of MS Bergensfjord by offering a cruise to Denmark for just NOK 99. This offer is valid until Thursday 3 April which was the original planned first day of operation for the two ships,” says Eva S. Mellgren, Fjord Line’s director of sales and marketing. She notes that the level of bookings for summer travel in Norway and Europe is a sign that many people have noticed Fjord Line’s totally new and more attractive service offering, both in terms of quality and capacity.

Cargo carriers have something to look forward to

Fjord Line’s two new cruise ferries are also important news for cargo carriers. The vehicle decks have 1 350 loading meters of capacity, which means there is plenty of space for passenger cars, transport trucks with trailers and other cargo. Transport Minister Ketil Solvik-Olsen announced last week that Fjord Line will also be allowed to carry transport trucks with trailers on the domestic route between Bergen and Stavanger. 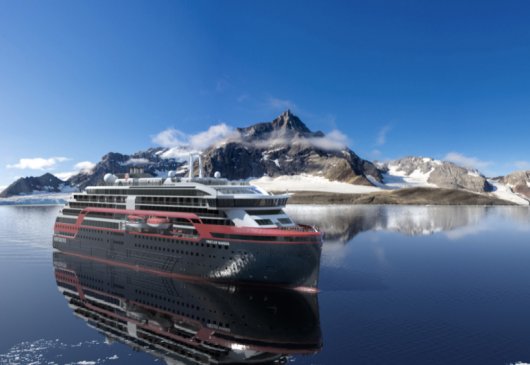