Despite the exceptional circumstances due to the coronavirus pandemic, the construction of the Aurora Botnia, Wasaline’s new car and passenger ferry, is progressing according to schedule, the company said in a recent update.

The ship is being built by Finnish shipbuilder Rauma Marine Construction and is scheduled for delivery in spring 2021.

The RoPax ferry was ordered by Kvarken Link, a company owned by the city of Vaasa and the municipality of Umeå and it will be operated by Wasa.

Once completed it will have the capacity to accommodate 800 passengers and freight capacity of 1,500 lane meters for cargo.

Aurora Botnia will replace Wasa Express, which now operates between Vaasa and Umeå.

The shipbuilding project is valued at about $ 130.3 million.

“We are starting to put together the last blocks and the construction of the hull, as well as the fitting of the machine rooms and car decks, is proceeding at a rapid pace. A total of seven of Aurora Botnia’s blocks will be delivered from Gdansk in Poland, of which three arrived at the end of April. We are currently fitting the blocks that were delivered,” says Johanna Kaijo, Project Manager of the newbuilding.

As informed, the construction of the cabins has also begun in Rauma. The vessel’s bow gate is scheduled to be delivered to the shipyard in August, along with other equipment including side doors and a moving car deck.

In addition to RMC’s own staff, there are approximately 400 persons from RMC’s network working on the Wasaline project. The yard admitted that the COVID-19 situation has posed additional challenges to the staffing of extra and rotating employees.

“We hope that the decisions made by the Finnish government on Monday, May 4, regarding the ease of labour movement will help this situation,” says Jyrki Heinimaa, President and CEO, Rauma Marine Constructions.

“Our vessel will be the world’s most environmentally friendly car and passenger ferry. It has been a pleasure to follow its construction and to witness how well the project has been advancing. The excellent degree of cooperation between the shipyard and its subcontractors is evident at all stages and the construction is going forward according to schedule despite the challenges,” comments Peter Ståhlberg, Managing Director of Wasaline.

The next significant phase in the construction of Aurora Botnia is the launch of the vessel in the autumn.

The new ferry will be the first-ever RoPax ferry with a Clean Design class notation. The vessel will have a hybrid power generation system, as well as an electric propulsion system rarely used in car and passenger ferries.

The four main engines, supplied by Wärtsilä, will run on both liquified natural gas and liquefied biogas, helping cut emissions in the Kvarken region of the Gulf of Bothnia.

The ferry can make use of biogas from a plant in Vaasa, which produces gas from recycled materials. When the vessel is approaching the harbor or departing, it can operate using electrical power from a rather large battery pack. 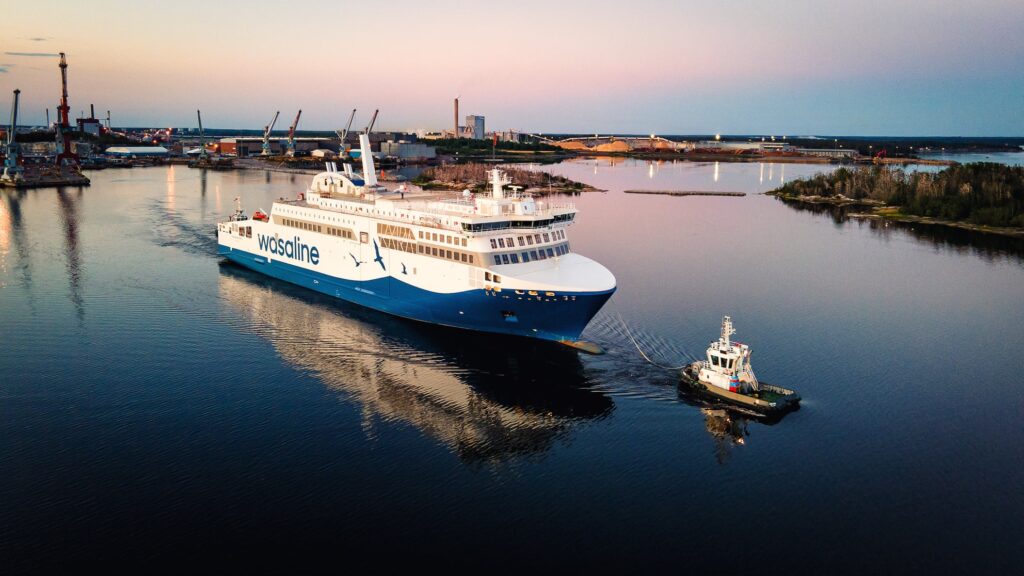 LNG-powered ferry Aurora Botnia sets off on sea trials
Posted: about 1 month ago
Gasum to provide LNG to Wasaline and Wärtsilä
Posted: 5 months ago
Red Sea to get its 1st battery hybrid ferry
Posted: 7 months ago