DEME, the Belgian dredging, hydraulic engineering and environmental solutions group, has secured a number of new contracts worldwide. The total value of these orders is approximately 1.6 billion EUR.

The Joint Venture will be responsible for the construction of 8.6 kilometres of quay wall, the reclamation of about 300 hectares of new land and the dredging of the fairways. The quay wall will be constructed by fabrication, floating, transporting and positioning of over two hundred caissons of 15,000 ton each. The Joint Venture has to complete the project within six years.

Worldwide several other major contracts have also been awarded to DEME beginning 2015.

In Belgium, DEME received, in JV, a five-year contract for the maintenance dredging on the River Scheldt between Flushing and Antwerp. The River Scheldt requires continuous dredging at these locations in order to guarantee safe access for deep-drafted vessels to the ports of Antwerp, Ghent and Terneuzen.

In Germany, Nordsee has been assigned, in JV, a two-year maintenance contract for the River Weser, which is set to start in 2015. This project is designed to maintain the accessibility of the ports of Bremerhaven and the ports along a 90 km long stretch of the river.

On La Réunion, France, SDI (Société de Dragage International), together with a consortium of Vinci companies (SBTPC (Société Bourbonnaise de Travaux Publics et Construction), Sogea Réunion and EMCC) have been awarded the deepening works of the existing western basin of Port Est and its extension. The client is Grand Port Maritime De La Réunion. Material is to be dredged and further transported to a dry reclamation area. The project starts in June 2015 and is the second phase of the extension. SDI executed the first phase between 2006 and 2008.

A second project in hand on La Réunion concerns the dredging and rock laying works for the ‘Nouvelle Route du Littoral’. The works have been awarded to SDI, in Joint Venture.

The JV is a subcontractor of the consortium GTOI (Grands Travaux de l’Océan Indien), SBTPC (Société Bourbonnaise de Travaux Publics et Construction) and VCT (Vinci Construction Terrassement). The Project, ‘Nouvelle Route du Littoral’, is executed for the account of the French Région of La Réunion. The JV scope consists of preparation and foundation works for a dike offshore the existing ‘Route du Littoral’ between the regional capital Saint-Denis and La Possession.

A trench has to be dredged wherein consequently rocks are placed using a side stone-dumping vessel. Also part of the JV scope is the installation of a scour protection. This project has started early February 2015.

In India, DEME’s Indian subsidiary, International Seaport Dredging (ISD), secured two new contracts. At Kakinada seaport, ISD will execute the second phase of the reclamation works for Kakinada Seaport Ltd. The first phase of these reclamation works was already completed successfully by DEME in 2011. And in Mumbai, Bharat Mumbai Container Terminals Pvt. Ltd. has awarded a contract for the dredging and reclamation works to ITD Cem.

These subcontract works are part of the development of the 4th container terminal in the Jawaharlal Nehru Port (JNP). ISD will perform the dredging part of the scope. The works start at challenging shallow depths impacted by high tidal ranges and consist of removing thick layers of soft and stiff clays in order to create the future berthing pocket and maneuvering area.

In Nigeria, DEME recently signed a contract with South Energyx Development FZE for the development of the remaining phases of the EKO Atlantic City project in Lagos. Some 500 hectares of land have been created so far. The phases 3 till 6 of this prestigious project include the reclamation of 42 million m³. Works will be executed over 3 to 4 years.

Another new project in Lagos is the first phase of the Ilubirin Lagos Lagoon Islands Project where DEME received the award for the dredging and reclamation works.

Further in Nigeria, Nigerian Ports Authority awarded CTOW a towage license for Onne Port. The license secures towage operations to all port users and this for a period of 10 years. DEME is major shareholder in CTOW; co-owners are Multraship and Herbosch Kiere. 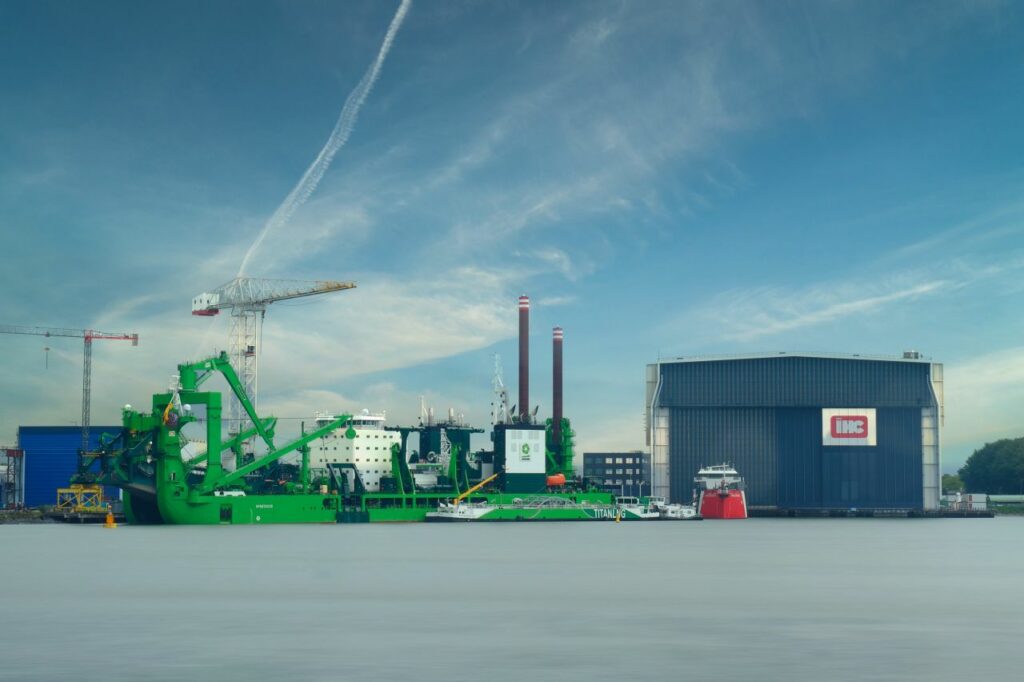