Advertisement
Back to overview
Home Green marine Drewry: Up to 40 Capesizes Could Lose Employment in 2019 due to Vale Dam Collapse

Drewry: Up to 40 Capesizes Could Lose Employment in 2019 due to Vale Dam Collapse

The latest disaster at the Brazilian mine Córrego de Feijão is likely to reduce Capesize demand by some 35-40 vessels in 2019, according to UK-based shipping consultancy Drewry.

To remind, the breach of the upstream Dam I of the Brumadinho-based mine occurred in the early afternoon of January 25, 2019, releasing a tsunami of toxic mud that swept across the area damaging buildings and trapping hundreds of people.

Based on the latest information from Vale, operator of the mine, 99 fatalities have been confirmed as a result of the dam collapse, 67 of which have been identified, while 259 remain missing. A total of 393 people have been found, and 192 rescued.

Drewry anticipates that the collapse of the dam will hurt Vale’s iron ore production from Minas Gerais in Brazil if the Brazilian government does not allow Vale to compensate the loss by increasing production at its other mines.

“While Vale wants to increase production at its other mines to compensate for the loss of the 40 million tonnes, a furious Brazilian government is unlikely to permit the company to increase operations in the near term. Allowing Vale to do so will only add to public resentment against both the company as well as the Brazilian government,” Rahul Sharan, Drewry’s lead analyst for dry bulk shipping, explained.

This is in particular due to the fact that this is the second incident in less than four years.

In November 2015, at Mariana, there was another disaster when a dam using the same old technology collapsed. After much criticism, Vale decided to decommission nine of its upstream dams and the process is still underway. But following the current disaster, Vale has decided to decommission all of the remaining 10 upstream dams as well. As of today, 40 million tonnes of iron ore production associated with the dams will be decommissioned, Drewry’s data shows.

As a result, Sharan expects that the loss of 40 million tonnes of iron ore on the Brazil-China route will leave an equivalent of 55-60 Capesizes unemployed, but will provide employment for some 20 Capesizes on the Australia-China route.

In a year, one Capesize vessel ships two million tonnes of iron ore from Hedland to Qingdao, while the same vessel ships just 0.7 million tonnes in a year from Itaqui to Qingdao. Therefore, at 12 knots, it takes 30 days for a Capesize vessel to complete a round voyage between Hedland and Qingdao while it takes 85 days for it to complete a round voyage between Itaqui and Qingdao, Drewry’s data shows. 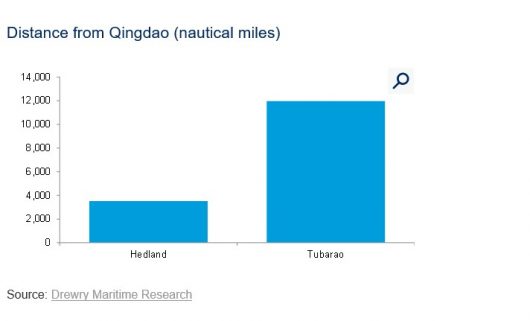 In the meantime, most of the iron ore produced at the affected mines is sold on a spot basis and exported to Asia.

Replacing the 40 million tonnes will be difficult for any exporter (India, South Africa and Canada) other than Australia.

India for example will find it difficult to increase iron ore exports as its domestic demand has been on the rise and the country is fast becoming a major iron ore importer.

Elsewhere, South African mines are struggling with rail/road logistic issues to transport iron ore to ports. The country’s iron ore exports declined in 2018, similar to those of India. Likewise, Canada’s exports of iron ore to Asia have been low, and have grown by less than two million tonnes annually over the past five years, Sharan pointed out.

“As these three major exporters of iron ore are unlikely to be able to compensate for Vale’s loss of production, Australia will most probably gain from Vale’s loss of exports. However, due to voyage distances a sharp decline in Capesize tonne miles is on the cards,” he concluded. 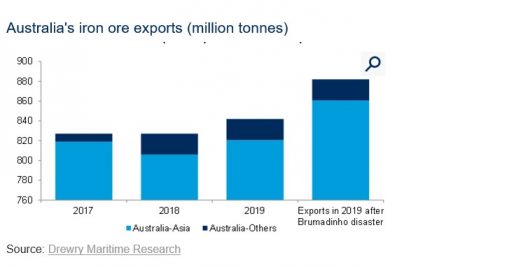 Vale’s CEO Fabio Schvartsman has proposed to Brazil’s Attorney General Raquel Dodge in Brasilia for the company to pay extrajudicial compensation to victims and family members of those affected by the dam breach.

According to Schvartsman, payments would be made as soon as the company signs the extrajudicial agreement with the relevant authorities.

“We are prepared to waive the lawsuits to expedite an agreement with the authorities of the State of Minas Gerais, so Vale can proceed immediately with the indemnification process,” he said.

Vale’s CEO also stated that the company is committed to repairing the environmental damages caused by the dam breach, but, that the main focus at the moment is on responding to the people affected by the incident.