Advertisement
Back to overview
Home Green marine Egypt to hold Ever Given, its crew until $916M claim is paid

Egypt to hold Ever Given, its crew until $916M claim is paid

The giant containership Ever Given, which hit the headlines after getting stuck in the Suez Canal last month, has been seized by the canal authority.

Namely, the Suez Canal Authority (SCA) is seeking $ 916 million in damages for the costs incurred by the ship’s blockage of the waterway.

The ship will be held until the claim is paid, with its crew of 25 members unable to leave the vessel.

Taiwanese shipping company Evergreen, the charterer of the vessel, said that any payments that are being demanded will be addressed by Shoei Kisen, the owners, and the liability insurance provider UK P&I Club in London.

The P&I club has insured the company for third-party liabilities that might arise from an incident such as this – including damage caused to infrastructure or claims for obstruction. The vessel itself and its cargo will have been insured separately.

“Despite the magnitude of the claim which was largely unsupported, the owners and their insurers have been negotiating in good faith with the SCA. On 12 April, a carefully considered and generous offer was made to the SCA to settle their claim,” the UK Club said on Tuesday.

During the meeting between the shipowners and SCA no consensus was reached. The following day (13th April), SCA immediately filed an application to arrest the vessel and this has been granted by the court.

“We are disappointed by the SCA’s subsequent decision to arrest the vessel today. We are also disappointed at comments by the SCA that the ship will be held in Egypt until compensation is paid, and that her crew will be unable to leave the vessel during this time.”

The UK Club added that SCA did not provide a detailed justification for this ‘extraordinarily large claim.’

This doesn’t include the professional salvor’s claim for their salvage services which owners and their hull underwriters expect to receive separately.

The P&I aspects of the claim are relatively modest, with the exception of the claim for loss of reputation, which is disputed, the club explained.

Reacting to the ship’s arrest, Evergreen said that it was informed by the Japanese shipowners that Ever Given had been officially arrested by the Court in Egypt on April 13, 2021.

“In order to lift the arrest order as soon as possible, Evergreen is urging all concerned parties to facilitate a settlement agreement to be reached. Meanwhile, Evergreen is investigating the scope of such a court order and studying the possibility of the vessel and the cargo on board being treated separately,” the company said.

“Evergreen assures to do its utmost to complete the mission entrusted by its customers with all due dispatch and to keep all adverse impacts to minimal level.”

To remind, the 20,000 TEU containership, flagged in Panama, ran aground on March 23 blocking the waterway for hundreds of ships for six days.

The grounding resulted in no pollution and no reported injuries.

The Suez Canal resumed commercial operations shortly after and was able to clear the backlog in the following few days.

Meanwhile, as the ship undergoes technical survey, local investigators boarded the boxship to talk with the crew on the potential causes of the grounding.

Previous reports indicate that gusting winds and poor visibility caused by a dust storm were the likely causes of the grounding. The owner refuted claims assigning grounding to a blackout due to a loss of power.

Furthermore, the flag state, Panama, has also launched an inquiry into the incident.

The UK Club said that owners have cooperated fully with the SCA throughout their investigation into the cause of the grounding, which is now complete.

As disclosed, the vessel’s Voyage Data Recorder (VDR) data and all other requested information have been provided to the investigators.

“When the grounding occurred, the vessel was fully operational with no defects in her machinery and/or equipment and she was fully manned by a competent and professional master and crew. Navigation was being conducted under the supervision of two SCA pilots, in accordance with the Suez Canal Rules of Navigation,” the insurer insists.

Furthermore, ABS, the vessel’s classification society, completed their surveys on 4 April 2021 and issued a certificate of fitness to allow the vessel to move from Great Bitter Lake to Port Said.

Ever Given is expected to undergo re-inspection in the port before completing her voyage to Rotterdam.

“The UK Club is working with all parties involved. Our priority is the fair and swift resolution of this claim to ensure the release of the vessel and cargo and, more importantly, her crew of 25 who remain on board,” the P&I club pointed out.

The owners plan to continue to negotiate with the SCA. 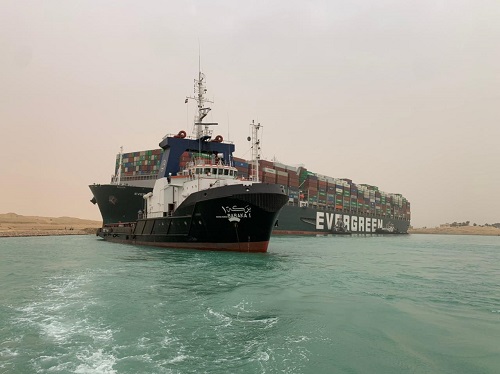