Greek oil and gas company Energean has submitted to the authorities of the Republic of Cyprus applications to import and supply natural gas to Cyprus, starting in 2021. 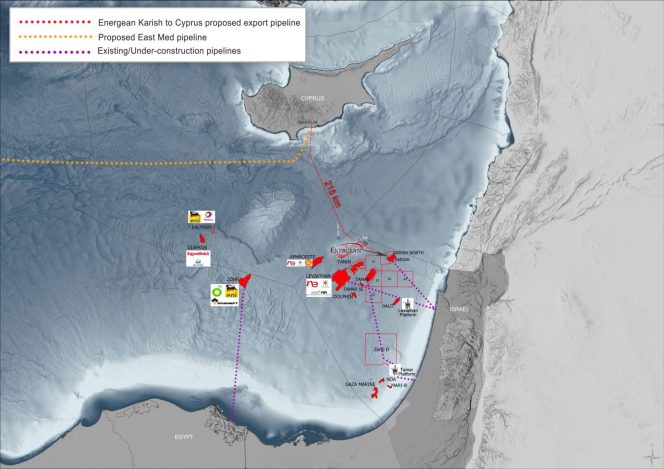 Energean said on Tuesday that the submission of the applications followed the ‘Karish to Cyprus Preliminary Pipeline Development Plan’ that had already been presented to Cyprus Energy Regulatory Authority.

According to the plan, natural gas will be transported through pipelines from the Karish offshore block to the Energean Power FPSO, and from there through a pipeline to Vassiliko, Cyprus, where it will landfall.

The pipeline from the Energean Power FPSO to Vassiliko will have a total length of 215 kilometres and transport natural gas from the Karish North field, offshore Israel, which contains 25 BCM of discovered recoverable resources.

Total investment will be circa $350 million and will be funded by Energean. The Republic of Cyprus will bear no upfront cost. Provided that there will be no delays in permitting procedures, the project will allow the Republic of Cyprus to receive competitively priced natural gas from 2021.

Mathios Rigas, CEO of Energean, stated: “Energean’s proposal offers the Republic of Cyprus the option to switch to natural gas as soon as possible, and under the most competitive terms. Execution of the proposal will bring competition to the Cypriot natural gas market, decrease energy costs across the economy and result in enhanced diversity and security of supply.

Energean has already signed Letters of Intent (LOIs) with all three IPPs that have been granted a license to construct combined cycle power plants in Cyprus: Power Energy Cyprus, Lysarea Energia, and Paramount Energy Corporation.

The Energean Power FPSO has a capacity of 8BCM per year and Energean has already signed firm GSPAs with Israeli IPPs and industrial consumers for 4.5 BCM per year for an average period of 16 years as of 2021.

The FPSO hull was undocked and floated out from the COSCO Shipyards’ dock in early October 2019. The sail away of the FPSO hull from China to Singapore is expected in late 2019.

In related news, Cyprus has recently approved the development plan and granted an exploitation license for the Aphrodite offshore gas field to a Noble Energy-led consortium. First gas is expected to start flowing in 2025. Aphrodite is a gas discovery made by Noble energy offshore Cyprus in 2011. The field, located approximately 170 kilometers south of Limassol, was declared commercial in 2015.

The development plan envisions deployment of a newbuild floating production facility at the Aphrodite reservoir, with an estimated maximum production capacity of approx. 800 MMCF per day, through five production wells at the initial stage, and export of natural gas to the Egyptian market.