The Ferguson Group, specialists in the rental of containers and accommodation and engineering modules to the offshore energy industry around the world, has announced plans to expand operations through a new base in Australia.

The brand new purpose-built yard and office buildings in Perth, WA, have been designed specifically to meet the needs of Ferguson Seacabs, Ferguson Modular and IceBlue Refrigeration Offshore, as demand for product ranges increase in the Asia-Pacific region.

Ferguson Seacabs offshore containers have started arriving at the new yard in preparation for operations relocating to the premises from December.

The total area of the new site is 9,500m2, with purpose-built offices and meeting rooms of 350m2 over two levels, and a 400m2 workshop, which also includes container and tank washbay facilities.

Steven Ferguson, Managing Director of the Ferguson Group, said: “Expanding our international premises and in turn the availability of products allows us to meet the growing needs of customers in the region and maintain the Ferguson Group values – to provide high-quality products, short lead times and exceptional customer support in all of our locations.”

Carol Pearce, General Manager of Ferguson Seacabs in Australia, said: “Our existing premises have served us very well and enabled Ferguson Seacabs to establish itself as a leading provider of offshore containers to the oil and gas industry in Western Australia. However, the company has grown considerably and now that Ferguson Modular has a significant presence we simply need more space. The new facilities will be ideal, having been designed to meet our needs, and we look forward to moving into them.”

The main focus at the new base continues to be the provision of a wide range of containers, engineering modules and accommodation modules including units supplied by the new division, IceBlue Refrigeration Offshore, which provides refrigeration and freezing solutions for food transportation and storage. The move to the office complex will not be complete until early 2012. At present, the company’s asset rental fleet exceeds 15,000 units making it one of the biggest global suppliers.

Ferguson Group continues to invest in increasing its fleet of high-quality A60 DNV 2.7-1 accommodation modules to ensure the global infrastructure is in place to support the worldwide operations of operators and major service companies.

The Ferguson Group employs more than 155 people worldwide through its divisions serving the offshore container rental and accommodation modules markets. The group, headquartered in Scotland, has operations in all major global oil and gas locations. 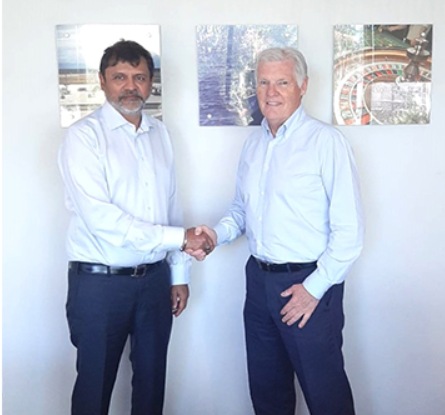