CMA CGM Brazil, a 15,072 TEU containership owned by the French container shipping major CMA CGM, is making milestones as the largest vessel to call at the East Coast of the United States.

The 2020-built ship arrived at the port of New York & New Jersey on September 12, docking at APM Terminals at the Elizabeth Port Authority Marine Terminal.

The vessel was delivered to CMA CGM in May 2020 by Hyundai Smaho Heavy Industries.

The 366-meter long, equivalent to eight Statues of Liberty, and 51-meter wide vessel is currently deployed on the weekly Columbus JAX service. The service connects the U.S. East Coast to Southeast Asia via the Suez Canal.

The port said the landmark arrival of the CMA CGM Brazil showcases the port’s ability to handle the world’s largest containerships, an outcome of key investments over the past few years.

These have included improvements such as the Bayonne Bridge Navigational Clearance Program, which increased the air draft of the bridge to 215 feet.

Other projects such as the Harbor Deepening Program, which created a 50-foot deep shipping channel, have also made it possible for the port to accommodate ULCVs.

CMA CGM said the deployment of the ship comes as a sign of support to the economic recovery of the U.S. economy from the impact of the COVID-19 pandemic.

“Our port partners on the East Coast played a crucial role in making this feat possible by implementing the necessary and timely infrastructure improvements needed to accommodate these larger ships. Improvements without which this milestone would not have been possible,” the liner added.

On September 15, the ship also made a record at the Port of Virginia as the biggest ship to call the port.

The CMA CGM Brazil was brought alongside the berth at VIG and during the course of her 24-hour stay in Virginia; multiple labor shifts handled nearly 3,300 containers of exports and imports combined.

The vessel eclipses the old record by more than 700 units.

“We invested $800 million over the last two-and-a-half years to expand and modernize our terminals in order to handle ships of this size,” said John. F. Reinhart, CEO and executive director of the Virginia Port Authority.

“We are talking to several ocean carriers about even bigger vessels, so this will be a good test for us. The ocean carriers have taken note of the work we are doing here and they know of our reputation for efficiency.”

The port said the visit of the CMA CGM Brazil, the vessels in its size class, and even bigger ships highlight the importance of the deepening and widening of the Norfolk Harbor and its commercial channels, which are currently 50 feet deep.

The port is dredging the harbor to 55 feet deep and widening the channels; when the work is complete in 2024, Virginia will hold the title of deepest port on the U.S. East Coast.

“We are following the trends, but more importantly, we are listening to our customers and the cargo owners moving their goods over our port,” Reinhart said.

“They are telling us, very clearly, they will be introducing bigger ships into their services that are going to require 55-foot channel depths and that we must be able to handle multiple big ships and process increasing cargo volumes simultaneously.

“We have that capacity above-the-waterline – in our terminals — and now we are working below-the-waterline. By the end of 2024, we will have spent nearly $1.5 billion to meet the needs of our customers and preparing The Port of Virginia for the future. Deeper, wider channels equate to safety, efficiency, and growth.”

As the CMA CGM Brazil continues its East Coast journey, it will set individual vessel-size records at the following ports: Port of Savannah (September 19) and Port of Charleston (September 20). 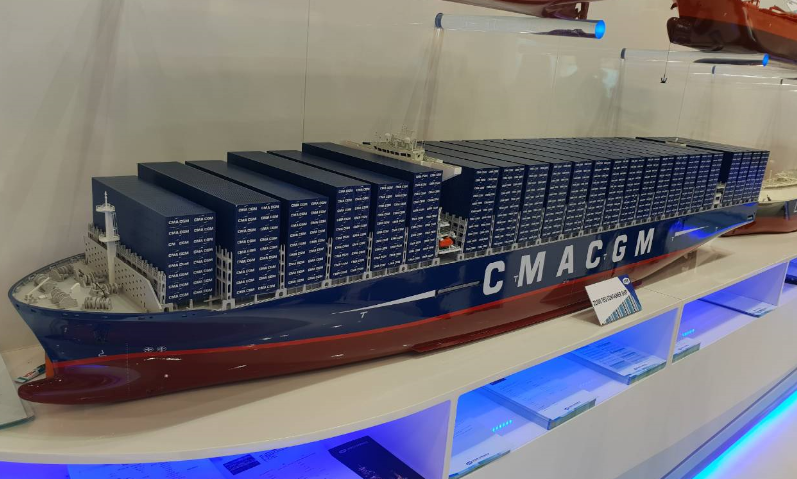