The Nordic energy company Gasum has expanded its LNG filling stations network in southern Sweden with a new facility in Malmö.

The station is the first to offer liquefied gas in the Malmö region and is Gasum’s 16th filling station to open in Sweden.

The station is part of Gasum’s plan to build a network of 50 filling stations in the Nordics by the early 2020s, the company said in a statement on Wednesday.

The facility has been built in conjunction with Volvo Truck Center and will be directly linked to the Center’s premises. It will offer both liquefied natural gas (LNG) and liquefied biogas (LBG) for heavy-duty vehicles.

“Interest in gas as a fuel solution is steadily growing and thanks to government climate subsidy programs such as Klimatklivet, there are now more than 800 gas-fueled trucks on Swedish roads,” says Mikael Antonsson, director traffic, Sweden, Gasum.

The filling station is a long-awaited addition and has triggered interest from a number of logistics companies because of its location at an important traffic hub.

Under the new emission standards adopted by the EU in 2019, carbon dioxide emissions from heavy-duty vehicles must be reduced by 3 per cent by 2030. This means that road transport with significantly lower environmental impact and LNG vehicles is under development in most of Europe and that demand for LNG-fueled vehicles will continue to grow.

Seen from the lifecycle perspective, use of LBG can reduce greenhouse gas emissions by up to 90 per cent compared to diesel. With LNG, carbon dioxide emissions are more than 20 per cent lower than those from conventional diesel.

The same infrastructure can be used for LNG and LBG, which makes it both easy and cost effective to switch from LNG to LBG. 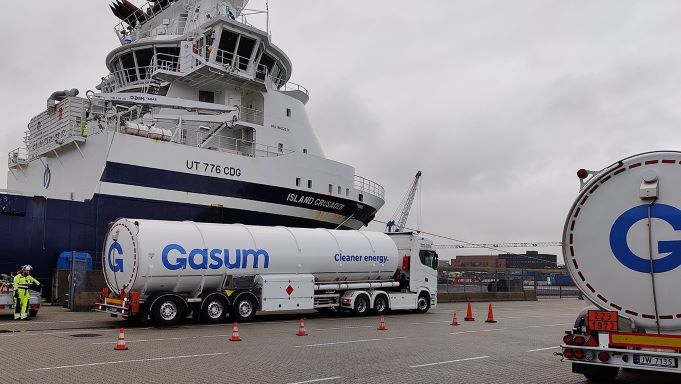