Off the coast of Svalbard methane gas flares originating from gas hydrate deposits at depth of several hundred metres have been observed regularly. A new study conducted by an international team under the leadership of scientists from GEOMAR Helmholtz Centre for Ocean Research Kiel and MARUM – Center for Marine Environmental Sciences in Bremen shows, that the observed outgassing is most likely caused by natural processes and can not be attributed to global warming. The study has been recently published in the internationally renowned scientific journal Science.

Methane hydrates are fragile. At the sea floor the ice-like solid fuel composed of water and methane is only stable at high pressure and low temperature. In some areas, for instance in the North Atlantic off the coast of Svalbard, scientists have detected gas flares regularly. The reasons for their occurrence were still unclear but one hypothesis was that global warming might cause the dissolution of gas hydrates. Over the past years, comprehensive investigations by an international team of researchers led by scientists from GEOMAR Helmholtz Centre for Ocean Research Kiel have now shown that it is very likely that the gas flares are caused by natural processes.

“In 2008, when we observed the outgassing of methane for the first time, we were alarmed”, reports Professor Christian Berndt, lead author of the study from GEOMAR. “The gas originates from depths where the hydrates should normally be stable. But we knew that a relatively small warming might melt the hydrates”, Berndt explains. Thus, the key question was to find out what causes the outgassing. Step by step, several expeditions that took place in the following years helped to solve the mystery.

One of the most obvious assumptions was that the increasing global warming has already extended into these regions of the North Atlantic. However, the investigations partly carried out with the German research submersible JAGO, pointed clearly to natural causes. “On one hand, we have found that the seasonal variations in temperature in this region are sufficient to push the stability zone of gas hydrates more than a kilometre up and down the slope,” Professor Berndt explains. “Additionally, we discovered carbonate structures in the vicinity of methane seeps at the seafloor”, Dr. Tom Feseker from MARUM adds. “These are clear indicators that the outgassing likely takes place over very long time periods, presumably for several thousand years”, Feseker continues.

Does this mean that global warming has no impact on potential methane release from the seafloor off Svalbard? Certainly not, because over long periods of time the deep ocean will also warm up and in particular the polar regions are affected. Here, enormous amounts of methane hydrate are stored in the ocean floor. “As a powerful greenhouse gas methane represents a particular risk for our climate. A release of large amounts of the gas would further accelerate global warming,” says Prof. Berndt. “Therefore, it is necessary to continue long-term monitoring, particularly in such critical regions as off Svalbard”, the Geophysicist concludes. 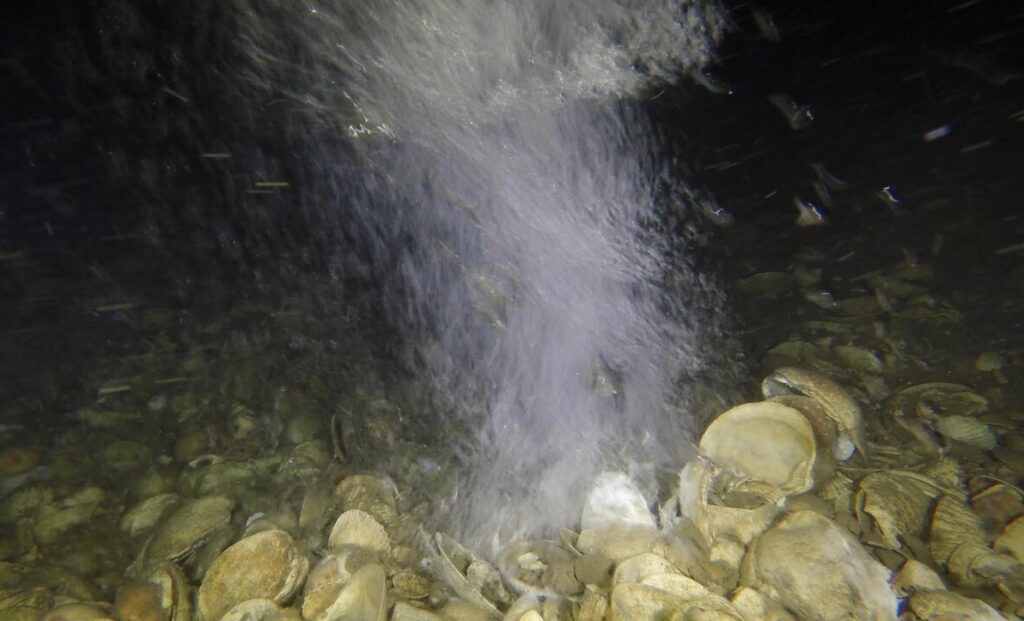