Greenpeace in another confrontation with BP rig in North Sea

The BP-Greenpeace saga has got a fresh new chapter as the Arctic Sunrise, a Greenpeace ship, has forced a BP-chartered drilling rig – Paul B. Loyd, Jr. – to make its second U-turn in the North Sea in less than 48 hours. 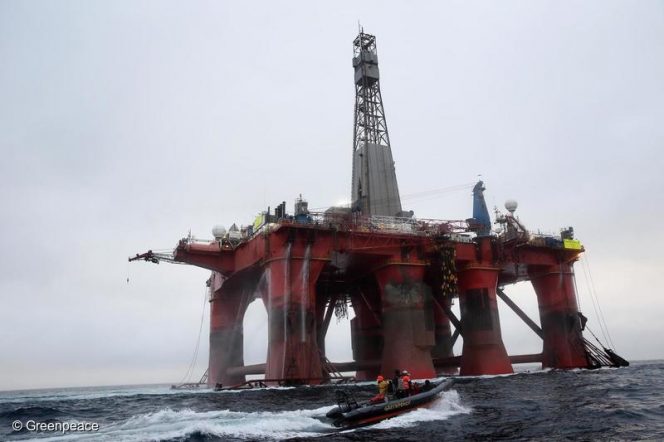 The first time the Greenpeace ship got ahead the Transocean-owned Paul B. Loyd, Jr. rig was on Sunday. As a result, the rig was forced to turn back. The activists also tried re-boarding the rig, but the towing vessel sped away from them.

On Monday, Greenpeace made a fresh attempt to block BP from drilling in the North Sea by hampering its attempts to get the rig to drill location on the Vorlich oil field, which would give BP access to 30 million barrels of crude.

Greenpeace said on Monday: “This morning, BPs oil rig, that was heading back towards land overnight, turned to go back to the oil drill site in the North Sea where it plans to drill for 30 million barrels of oil. Then, at 10.30am this morning, it turned for the second time and is now heading back to land. Greenpeace is now following the 27,000-tonne oil rig back to land.”

The protest has been going on for ten days now, including seven days in Cromarty Firth where three teams of Greenpeace activists tried to stop BP from towing the rig to the sea.

After these three separate teams were arrested over seven days, the Arctic Sunrise arrived last Saturday to pursue the oil rig as it was towed out to sea.

Sarah North, Greenpeace International climate activist on the Arctic Sunrise, said: “We are determined to stop BP drilling new oil wells in the North Sea. The ball is in BP’s court.

“Will they continue with their climate-wrecking plan or wake up to the climate emergency that we face? We’re calling on them to act with leadership by transitioning to 100% renewable energy in response to this escalating global crisis.”

Eleven Greenpeace activists have been arrested so far, and five were scheduled to appear at Tain Sheriff Court on Monday, charged with breach of peace. Three freelance photographers were also arrested but subsequently released.

According to the latest AIS data, the Paul B. Loyd, Jr. is currently in the North Sea surrounded by five vessels, VOS Enterprise, Siem Pearl, Caledonian Vanguard, Havila Venus, and Magne Viking.

Offshore Energy Today reached out to BP, asking if the rig contract had started and if the dayrate was already being paid for the rig, given the Greenpeace situation. BP did not respond.

When it comes to BP’s plans in the North Sea, the Vorlich field – a two-well development in the central North Sea – will be tied back to the Ithaca Energy-operated FPF-1 floating production facility, which lies at the center of Ithaca’s Greater Stella Area production hub. The Vorlich field -is located 241 kilometers east of Aberdeen.

BP committed to two new North Sea developments – Alligin and Vorlich – back in April 2018. The oil major received approval from the UK’s Oil and Gas Authority to proceed with the Vorlich development in September 2018.

In December 2018, Petrofac was awarded a construction and commissioning contract, which will enable the tie-back of Vorlich field to Ithaca’s FPF-1 floating production facility.

The field is expected to come on stream in 2020.