The ship is the fifth of the nine 23,000 container ships ordered by CMA CGM from China State Shipbuilding Corporation in 2017 and the third ship from the series built by Hudong Zhonghua.

In the first half of 2021, another four 23,000TEU dual-fuel container ships will join the CMA CGM fleet, the shipbuilder said.

By 2022, CMA CGM will own 26 LNG-powered ships as part of its transition to becoming carbon-neutral by 2050. It is estimated that an LNG-powered vessel emits up to 20% less CO2 than fuel-powered systems.

The ULCVs will feature WinGD’s dual-fuel engines and GTT’s 18,600-cbm fuel tank, both largest ever built.

Hudong Zhonghua said the integrity of the ship before the conventional sea trials was greatly improved compared with the previous ships. The vessel also completed generator and boiler gas tests in record time shortening the vessel’s construction period. 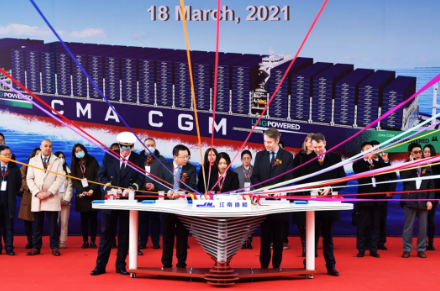