A project to construct the world’s first zero-emission hydrogen vessels has been awarded NOK 219 million ($25 million) by the Norwegian government-owned organization Enova.

As explained, the funds will enable Wilhelmsen, a Norwegian maritime group that leads the project, to further develop the technology and additional infrastructure required to support the shipping industry’s ambitions towards zero-emission fuels.

“The funds from Enova are a pivotal step in making Topeka happen, and an important milestone for the maritime industry and for Norway as a nation when considering hydrogen as a fuel,” Jan Eyvin Wang, Senior Vice President, Industrial Investments at Wilhelmsen, commented.

“To reach our ambitions for zero emission ocean transport, new technology has to be developed. Batteries cover many needs but not all. This means the introduction and usage of zero emission energy carriers such as hydrogen is crucial,” Nils Kristian Nakstad, CEO for Enova, said.

Specifically, the project revolves around the construction of two roll-on/roll-off (RoRo) vessels servicing the short sea segment. The vessels will, amongst other tasks, move goods between offshore supply bases along the Norwegian west coast. In addition, the Topeka vessels will transport hydrogen to different filling stations where local ferries and other vessels as well as land transport will have hydrogen as a ready-to-use fuel.

“With this new funding, our vision of hydrogen vessels and infrastructure supporting various industries along the coast is much closer to becoming a reality,” says Jan Eyvin Wang continued.

Wilhelmsen aims to be an integral part of the development of hydrogen for marine applications in Norway and also internationally.

“We believe we can build and learn in Norway. We have the political will here, and Wilhelmsen has a unique network along the coast through our subsidiary company NorSea Group. Our goal is to start with our two Topeka vessels, and in time expand to be able to support the entire maritime industry with zero-emission fuel alternatives,” Wang further said.

“Together with our partners, Enova and aided by the Norwegian government’s ambitions, we can make Norway the Silicon Valley for maritime hydrogen globally.”

Going under the concept name Topeka, the vessels will be the first of their kind to enter commercial service. Providing a two-in-one solution, they will sail on a fixed schedule carrying both coastwise customer cargo and containerized liquid hydrogen (LH2) to the bunkering hubs.

The vessels are planned to be operational in 2024.

Norway’s west coast is dotted with bases serving the offshore industries, with base-to-base transport representing a heavy-duty transport route eminently suited to LH2. The bunkering hubs will in the future supply LH2-powered vessels including ferries and seagoing tonnage.

“Hydrogen as a fuel enables opportunities for low, or zero-emission shipping. Topeka will be our first step towards scalable LH2 fueled maritime operations. We shall create a full LH2 infrastructure and commercial ecosystem, while at the same time removing yearly some 25 000 trucks from the roads,” Per Brinchmann, vice president of special projects at Wilhelmsen, who is also coordinating the project, said. 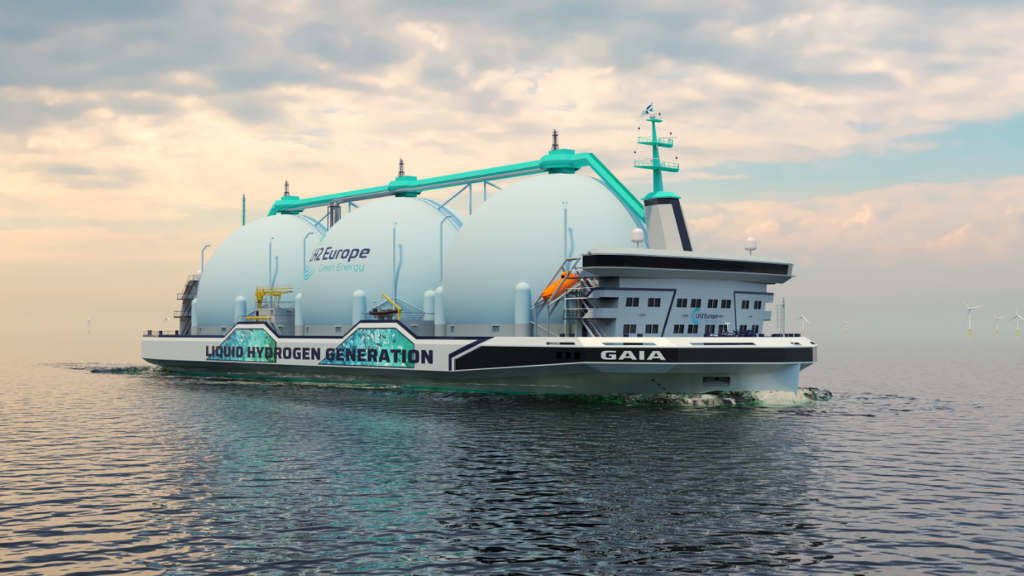