Advertisement
Back to overview
Home Green marine Interview: Clamping Down on US Port Emissions

Interview: Clamping Down on US Port Emissions

As the world tries to set up targets to cut emissions, we look at what shipping sectors are doing. The US port industry adopted a number of programs, which include developing emissions inventories, clean air action plans, clean truck programs, fuel switching, yard equipment changes, changes in train locomotives and dredges, etc.

The US efforts on the decrease of emissions are led by California, while other port areas have also adopted effective programs, which differ based on local conditions and community concerns, including whether they are in a county that is in or out of attainment for federal National Ambient Air Quality Standards (NAAQS).

World Maritime News spoke with American Association of Port Authorities’ (AAPA) President and CEO Kurt Nagle to find out what is currently being done in the US on the matter.

He said that the Environmental Protection Agency’s (EPA) Diesel Emission Reduction grants have helped incentivize much of this program. Ports have also joined initiatives like Green Marine which provide programs to reduce and measure reductions.

Nagle further said that MARPOL Annex VI Emission Control Act (ECA) fuel standards, that have recently been adopted, will have a significant impact on vessel emission reductions, adding that AAPA and its member ports are working with EPA on developing a voluntary program to encourage ports to further reduce emissions.

WMN: As shipping has recently been left out of the Paris deal on CO2 reduction, how can ports help the shipping industry set/reduce pollution from ships? Are financial incentives to green vessels a way to go? Do you see this trend picking up in US ports?

Nagle: Some ports have installed shore power for vessels, but this is mostly in California, where it is mandated by the state, and primarily for cruise ships, although shore power is not always feasible. The new MARPOL ECA requirements are expected to have a great impact in lowering air emissions. The cruise industry is testing scrubber technology as an alternative to ECA fuels and this will help solve many of the challenges and costs associated with finding and using low-sulfur fuels.

WMN: Reducing air emissions remains a high priority for ports. How can this sector further contribute to the improvement of air quality and CO2 reduction from shipping?

Nagle: AAPA and other maritime industry stakeholders are working on making recommendations for a voluntary EPA program that will address many air quality and CO2 reduction issues. Its final recommendations will be available at the end of 2016. Continuing replacements of ships, trucks and locomotives will also result in emissions reductions as the new fleets are using the latest technologies and engines to produce cleaner emissions.

WMN: What alternatives are being offered to shipowners at US ports? How would you assess the current situation in US ports with regard to LNG bunkering at ports?

Nagle: Some U.S. ports offer incentives for speed reduction and the new ECA requirements take a regulatory approach that mandates cleaner fuels. LNG is in the early stages of development for use as a ship fuel and might be useful for point-to-point travel, like between the Pacific Northwest and Alaska, where it is being tested. The US Department of Transportation’s Maritime Administration (MARAD) currently has grants available for LNG vessels.

WMN: Since the introduction of the new sulphur requirements of less than 0.1 percent sulphur content in ship fuels, which came into force in January 2015, what have been your experiences with the new rules so far? Has the air quality improved?

Nagle: In California, the Air Resources Board required use of 0.1 percent sulphur fuel beginning 24 nautical miles from shore starting January 1, 2014 – one year before the same requirement came in effect from the 200-mile Emission Control Area treaty. Accordingly, the Port of Los Angeles’ 2014 Emissions Inventory reported a substantial drop in SOx emissions from ships compared to the 2013 emissions inventory, largely due to this fuel change.

According to the Port of Long Beach (POLB), the low-sulfur ship fuel makes a difference in their port-wide emissions, as seen in their yearly emissions inventory. But the benefits came sooner for Californian ports than ports in other states because of California’s stricter air emissions standards. The port said that low sulfur distillate fuel is one of the most effective strategies available to reduce emissions from ships. Combined with POLB’s other air quality programs for trucks, trains, yard equipment and harbor craft, the port said that port-related diesel emissions have declined 85% since 2005.

The Port of Houston Authority told AAPA they will be publishing an emission inventory for the year 2013 later this year which will only account for the 1.0 percent sulfur content ECA requirement that started in August 2012. The preliminary 2013 SOx and PM2.5 emission results from this inventory show a reduction in SOx and PM emissions when compared to the previous 2007 emission inventory. This is primarily due to the lower sulfur fuel. Furthermore, these emissions were reduced despite an increase of 7% in vessel arrivals. The port said it expects that the next emission inventory in 2018 will show more significant SOx and PM reductions due to the more stringent 0.1 percent sulfur content requirement.

WMN: What are the main challenges for the ports with respect to compliance to BWM and implementation of the convention in general? What would ratification of the BWM convention mean for the US ports?

Nagle: The main challenge with regard to ballast water management is for vessels, more so than ports, as the federal regulation currently sits. However, federal law currently allows states to have separate state standards and if those standards are too onerous, ports in that state could lose ship traffic. AAPA strongly supports a uniform federal standard for ballast water management and is actively advocating for Congress to enact legislation this year to accomplish that.

Commenting on the potential implementations of the BWM Convention, Nagle said that AAPA strongly supports legislation this year that would set uniform ballast water standards throughout the US.

WMN: We are seeing US ports, especially those on the West Coast, investing in infrastructure so as to accommodate larger ships. How would you assess the readiness of US ports to handle these ships and are these investments justified especially following the withdrawal of CMA CGM’s giant 18,000 TEU+ ships from Asia-US trade?

Nagle: The trend worldwide is that ocean-going ships are getting larger, both for handling freight and for cruise passengers. This is a reflection of the savings shipping companies can realize with economies of scale. While certainly not all ports need to upgrade their infrastructure to handle the ultra-large vessels, most are in the throes of improving their infrastructure to handle some degree of larger, more modern ships than they are currently capable of handling. U.S. ports and their private-sector partners are planning USD 155 billion in infrastructure investments over the next five years in order to remain competitive in a fast-changing world market where costs and transportation efficiency differentials between ports are measured in pennies and fractions of a percent. 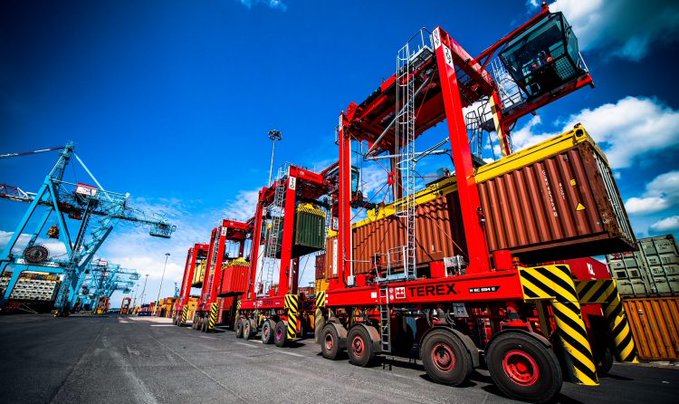