Last year was also important for GTT since the company’s capital structure has significantly changed following its listing on Euronext Paris. French oil and gas giant Total sold its 10.4% stake in GTT to Temasek. On top of that, Hellman & Friedman, which also had a 10.4% stake, exited the company through two private placements to institutional investors.

Following this transaction, GTT’s free-float portion of capital rose to 49%. The remainder of GTT shares is owned by LNG player Engie, formerly known as GDF Suez, which has a 40.4% stake, and 0,2% is held by employees and management.

In an interview with LNG World News conducted at GTT’s headquarters in Saint-Rémy-lès-Chevreuse near Paris, GTT’s chairman and CEO, Philippe Berterottière, discusses the company’s business, implications of the oil price slump on the LNG industry, as well as the usage of liquefied natural gas as fuel for ships, and the company’s plans for the future.

Last year and the first quarter of 2015 was quite busy for GTT in terms of new orders for LNG carriers.

GTT secured 36 orders to equip LNG carriers (including 10 ice-breaking LNG carriers) with its technology in 2014, and 25 in the first quarter of this year.

You said in the May investor presentation that GTT expects to secure orders for its technology for about 84% share of the forecasted LNG carrier newbuilds between 2015 and 2024.

Can you elaborate more on this topic?

“Building on its technological expertise in the liquefied natural gas industry, GTT has become the world leader in containment systems for the transport and storage of LNG in cryogenic conditions. More than 70% of the currently operating global LNG carrier fleet uses membrane technology developed by GTT, and 90% of new orders for LNG carriers over the period between 2008 and 2014 were placed for our systems. Thanks to our continuously improved technologies, we are quite confident that we will keep a very strong position on our markets. Based on scenarios provided by Poten & Partners, we are contemplating between 270 and 280 LNG carriers over the next ten years for GTT.  Between 25 and 35 FSRUs and between 3 and 7 FLNGs can also be forecast.“

“The global LNG demand is estimated to grow by an annual 5,6% rate over the next ten years. Long-term trends which underpin this growth are very strong. Among them are cost competitiveness and the fact that emissions regulations will encourage the use of LNG as a fuel. If maintained at its current level, the LNG production will not be sufficient to meet the demand over the next few years. So, there is a need for increased production which also means that there will be an increasing need for LNG transportation and storage. The LNG transport market is forecast to grow by an annual average growth rate of 4.5%. On top of the underlying growth in the LNG market, LNG trade routes are becoming more complex. Northeast Asia, this is to say mainly Japan, Korea, and China and Taiwan count for two-thirds of the market.

At the same time, North America is becoming a major exporter thanks to shale gas production. Bear in mind that to deliver 1 million tons from the US or from Gulf of Mexico to Northeast Asia, 2.2 ships are needed whereas just 0,6 is needed for delivering the same quantity from Indonesia to Northeast Asia. This is a major game changer for us in terms of number of ships to be ordered and we strongly believe that even though there are probably too many ships currently available, the market should be in a situation of deficit by 2018.”

How much will the oil price slump affect the LNG carrier market, and the whole industry in general during this period?

“In Asia, the decline in oil prices has caused a drop in LNG prices.  Consequently, we have seen delayed or suspended decisions as to the startup of certain projects. For example, in Australia, whose larger investment projects are also impacted by competition from U.S brownfield projects. We have recently seen Cheniere Energy announcing the final investment decision (FID) of its Corpus Christi LNG project in Texas. Do not forget that Investment decisions about LNG terminal projects are not tied to annual decisions but are based on the forecasts for increased supplies of LNG in the long term.”

The number of ships using liquefied natural gas as fuel is increasing and more and more infrastructure projects are planned or proposed along the main shipping lanes.

According to DNV GL, the uptake of LNG as a ship fuel will continue to advance toward 2020, and the classification society believes that there will be 1,000 non-LNG carrier vessels running on the chilled gas in 2020 or shortly thereafter.

What is GTT’s point of view on the usage of LNG as fuel for vessels?

“The bunkering market is nascent but promising. For the time being, the market is starting more slowly than we could have expected because of the current low level of oil prices and the relatively modest amount of fines for non-compliance of ECA regulations which came into effect on January 1st, 2015. I expect it to gain considerable momentum over the coming years because these regulations pave the way for a new cleaner fuel. LNG is, according to many, the best alternative to heavy marine fuel propulsion from an economic and environmentally-friendly standpoint.

As the LNG as fuel solution gains in expertise, efficiency and know-how, and with the development of a wider LNG supply chain and bunkering network at major ports, the relatively slow development that we have seen since 2000 should consequently speed up, in particular thanks to increasing financing of the European Union, the Norwegian Nox Fund or the US Maritime Administration (Marad) as well as deepening political support. Already, there has been a notable increase in the interest surrounding the conversion option in the last two years, with several companies announcing their intentions to convert ships to become LNG-fuelled.

Another trend that has emerged recently is for the construction of “LNG fuel conversion-ready ships”, which will run on traditional marine fuels when they are delivered into the fleet, but which are designed to be easily converted to run on LNG fuel when necessary.  At GTT, we are working actively to provide the market with competitive solutions and expand on this market through new types of partnerships. For example, in 2014, we signed a license agreement with Gabadi, making it the company’s first licensed subcontractor to provide installation services to shipyards.

Can you update us on the construction progress of the LNG barge ordered by Conrad Shipyard?

“Just a quick reminder for our readers. As mentioned before, GTT North America signed an agreement earlier this year with Conrad Shipyard, a major US shipyard, to design and build LNG bunkering barges and tanks for LNG propelled vessels. Following this agreement, we received an order from Conrad Shipyard for one LNG bunker barge. It is the first ever dedicated LNG barge for the North American market. This order is a landmark because it is a step forward in the formation of a local LNG supply chain for merchant vessels and because it represents a return of both GTT and the construction of LNG vessels to North America.

The last LNG carriers built in the US have been delivered in the 70’s. This new barge has been entirely designed by GTT, which is quite new. It will be built with the Mark III Flex containment technology and will be equipped with the bunker mast REACH4 also developed by GTT. It is a highly innovative refuelling arm, which can transfer LNG to the customer’s vessel simply and safely. The barge is expected to be delivered in the first half of 2016.“

How do you see the small-scale LNG market in the upcoming period?

“We are talking of vessels with a capacity ranging from a few thousands of cubic meters to a few tens of thousands, so quite far from the usual nominal capacity of a transocean LNG carrier, which is today 174,000 cubic meter. The purpose of such vessels will be to bunker LNG fuelled vessels and also for small scale distribution for energy generation as replacement of other fossil fuels, of course all this depending on price.

We see a good potential in this market because there is a real need for a supply chain adapted to smaller quantities, coastal transportation, river transportation like in China for example, supply of LNG to islands in the Caribbeans or in Southeast Asia. GTT technologies can be used for small tanks and make it possible to build smaller carriers to meet this need. Three small scale ships of 20 000 m3 equipped with GTT technologies have been in operation for the last 20 years. Ships design with membrane can optimize the capacity and the size of the vessels and minimize the drought. With membrane, CAPEX optimized ships are possible. We work with many shipyards to propose these solutions.”

What will be GTT’s focus for the future?

“We have already carried out a lot of work on extending our containment applications into onshore tanks, offshore applications and multi-gas transport, and we have already won orders in all these segments. At the same time, as I mentioned earlier, we are developing solutions for LNG as a maritime fuel and small capacity LNG carriers, whose growth is going to be driven by the need to move LNG along coasts and up rivers and the development of the market for LNG as fuel.

GTT’s technologies are perfectly positioned to capture this potential. We are also offering innovative market-leading engineering, training, consultancy and support services to shipowners, shipbuilders, terminal operators and gas companies. This includes, for example, an innovative monitoring system to help shipowners manage the effects of LNG sloshing in the tanks of their carriers.”

Would you like to add something? Any new projects?

“We announced recently the signature of two cooperation agreements with Samsung Heavy Industries and Hyundai Heavy Industries for the industrialization of our new Mark V technology which is an optimized version of the Mark III system and its sister Mark III Flex.  It will offer significant improvement of the daily warranted boil off rate of LNG during transport. This means significant savings for shipowners. These two partnerships allow us to be quite confident in the possibility for Mark V to be commercialized from 2015.

Launching Mark V took some years of research and development. It illustrates the significant efforts made by GTT in innovation to continuously improve the performance of its existing systems and meet the operational demands of our customers. We devote nearly 25% of our workforce and operating expenses to R&D to make sure we are always offering cutting edge technology.“

During a visit to GTT’s headquarters near Paris, the Staff of LNG World News was given a tour of the company’s laboratory, where all the materials and technologies are being tested.

These tests are carried out under stringent terms and conditions including cryogenic atmospheres. 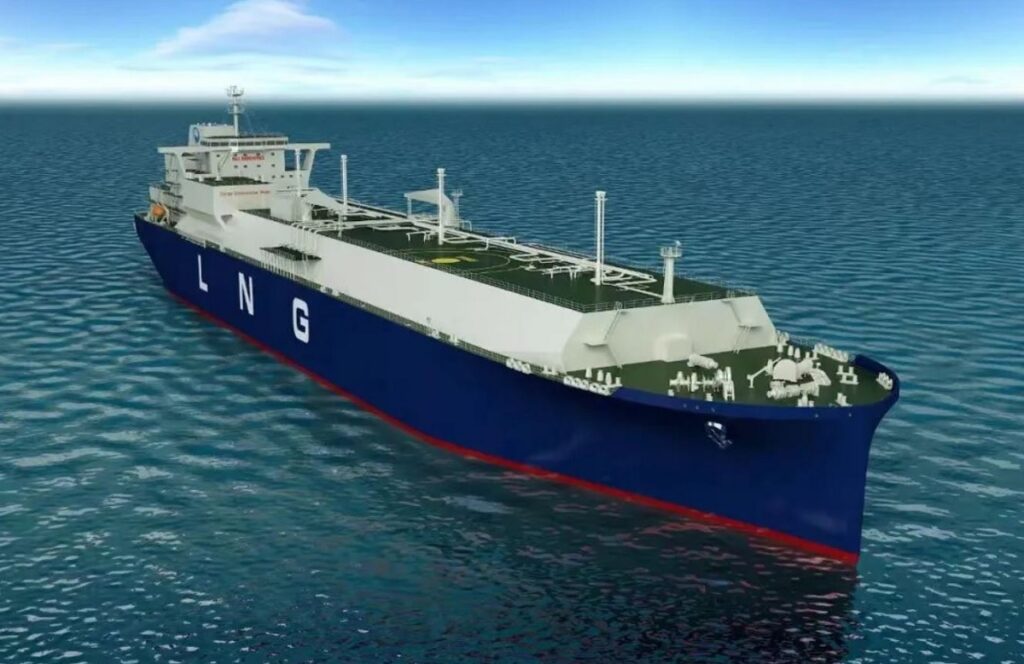