The Isle of Man Steam Packet Company (IoMSPC) has awarded contracts for technical advisory services and the construction of its new battery hybrid ferry.

Houlder, a London-based design & engineering consultancy, will act as technical advisor in the design and build of the ship, while South Korean shipbuilder Hyundai Mipo Dockyard (HMD) will construct the vessel.

As explained, the new purpose-built roll-on/roll-off passenger (RoPax) vessel will meet the challenging requirements of increased vessel capacity and comfort, as well as tolerating harsh Irish Sea conditions throughout the annual cycle of vessel operations.

The vessel is due for delivery in spring 2023 and will bring high levels of on-board facilities and an enhanced freight capability to the island. It is also intended to be more environmentally efficient and manoeuvrable in poor conditions.

According to Houlder, the project presents two key design challenges, including providing a dependable lifeline throughout winter and can consistently tolerate the harsh conditions of the Irish Sea in its route between Douglas and Heysham, Lancashire. Additionally, the new vessel will provide increased passenger capacity.

Houlder will guide the shipyard during the build of this new vessel, ensuring it meets the design specification, as well as advising IoMSPC on technical and regulatory aspects.

“We are delighted to be working with the Isle of Man Steam Packet Company again on its latest project and providing pragmatic solutions to the various technical and logistical considerations for the new vessel,” David Wing, Ship Design & Engineering Director, Houlder, said.

“The Isle of Man has significant ambitions for growth in tourism to the island and, IoMSPC is the only company to offer passenger and freight ferry services. There are many challenges in this brief including the vessel’s size constraints in tight ports while meeting lane metre requirements for freight, as well as meeting environmental expectations for the vessel’s life-span which includes reducing local emissions while in port.”

On 31 July 2020, IoMSPC board of directors signed a contract with Ulsan-based HMD for the construction of the ferry.

The signing follows a week-long visit to Korea by senior personnel from the Isle of Man Steam Packet Company, during which they visited the shipyard where the vessel will be built, viewed a recently completed ship to assess the standard of work and discussed technical and commercial considerations with HMD executives.

Work on physically constructing a replacement for the conventional ferry, Ben-my-Chree, is now due to start in mid-2021 after detailed plans are finalised and agreed between builder and buyer.

The process began last autumn when the company commissioned a tender exercise, during which a large number of shipyards around the world expressed an interest in building the vessel.

Celebrating its 190th birthday this year, IoMSPC is the oldest continuously operating passenger shipping company in the world. The company was purchased by the Isle of Man Government in May 2018. 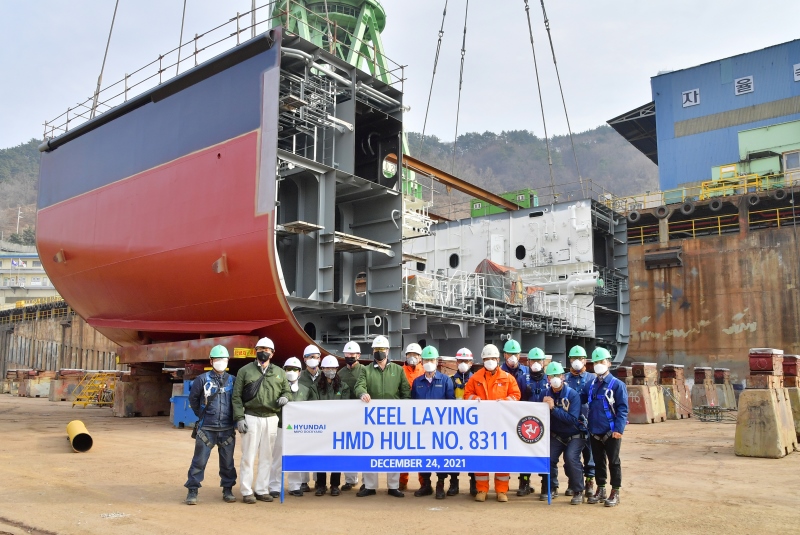