The 86,700 m3 LP/NH3 carrier will be powered by LPG fuel and it is such vessel ordered by NYK.

It is equipped with separate cargo tanks designed to carry LPG and NH3 at the same time.

Kawasaki plans to complete the construction of the vessels at its Sakaide Works in 2025.

“The advantage of this dual-purpose vessel is its capability to simultaneously carry LPG, which is already used as a low-carbon energy source, and NH3, a new fuel contributing to the establishment of a decarbonized society. Another feature is the greater capacity of the cargo tanks as compared to conventional carriers, which was achieved without significantly changing the vessel’s length, breadth, or other main specifications,” Kawasaki said.

Fueled by low-sulfur fuel oil and LPG, the vessel will meet SOx emission standards set by the International Maritime Organization (IMO), as well as the IMO’s Energy Efficiency Design Index (EEDI)Phase 3 regulations, which are applicable to adopt stricter CO2 emission standards in 2022.

The shipbuilder said that the vessel would be equipped with a shaft generator that converts the rotational energy of the main engine into electric power. This enables the vessel to stop all the diesel generators under normal sea-going conditions.

The order is being reported just two months after Kawasaki secured a contract for a similar vessel from Kumiai Navigation PTE.

Namely, last June Kumiai placed an order for an 86,700 m3 LPG/NH3 carrier set for delivery in 2025. The contract also provides an option to order another vessel.

As part of its contribution to the global decarbonization efforts, Kawasaki is investing considerable efforts in developing and building more LPG-fueled LPG carriers and other commercial vessels that meet environmental standards and developing other eco-friendly marine technologies.

These products include vessels for transporting liquefied hydrogen, considered to be the next-generation energy source.

In April, the shipbuilder revealed an approval in principle (AiP) from Nippon Kaiji Kyokai (ClassNK) for a large liquefied hydrogen carrier. The large-sized vessel is equipped with a cargo containment system comprising four liquefied hydrogen tanks having a combined capacity of 160,000 m3. 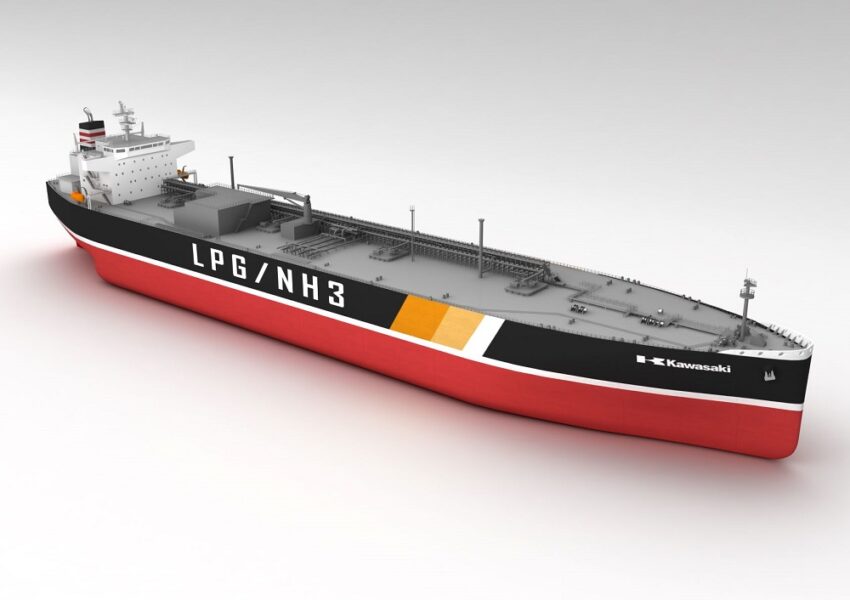