Lithuanian liquefied natural gas terminal operator Klaipedos Nafta (KN) said it has expanded the list of clients at its facility with Imlitex starting to use the facility’s services in May.

It is planned that the LNG cargo purposed for this company will reach Klaipėda in the coming weeks, KN said in its statement.

Speaking of its capacity booking, Dominykas Kryževičius, gas trade business manager of Imlitex said, “in the context of the favorable market situation, we have acquired an LNG cargo, part of which will be sold in the wholesale market, and the other part will be left for the natural gas portfolio diversification.”

He added that the company plans to perform the LNG supply to the Baltic States through the terminal in Klaipėda.

In April, 83 percent of gas reaching Lithuanian users were provided through Klaipėda LNG terminal, and in May, as preliminary data says, a total of 1,64 TWh of gas was regasified, which is approximately the same as the total amount of gas consumed in Lithuania.

The major part of gas, 90 percent, was brought from Norway, Klaipedos Nafta said.

“The LNG infrastructure developed in Klaipėda determined the fact that, with a favorable situation in the international markets, our national natural gas suppliers can offer cheaper energy resources not only to Lithuanian users but also to clients from other Baltic states. Even when including the price of the use of the transmission systems in the neighboring countries, the LNG submitted through Klaipėda LNG terminal can be offered for a more competitive price, than when submitted through pipelines from eastern countries,” said Arūnas Molis head of Klaipėda LNG service of KN.

It is foreseen that the similar situation in the international markets will continue for upcoming months, since the TTF index of the Western European natural gas exchange has decreased by almost a half since October last year, and the price of the future agreements in June reaches about €13.50/MWh. ($15.1/MWh).

In May, the terminal accepted 5 gas carriers, which brought about 304,000 cubic meters of LNG, and one small gas carrier was loaded with about 3,000 cbm of LNG.

It is planned that in the 5 gas carriers arriving in June will bring to Klaipėda 310,000 cubic meters of LNG, KN said.

Apart from the new user, regasification services of Klaipėda LNG terminal are currently provided to Lietuvos energijos tiekimas and Achema. 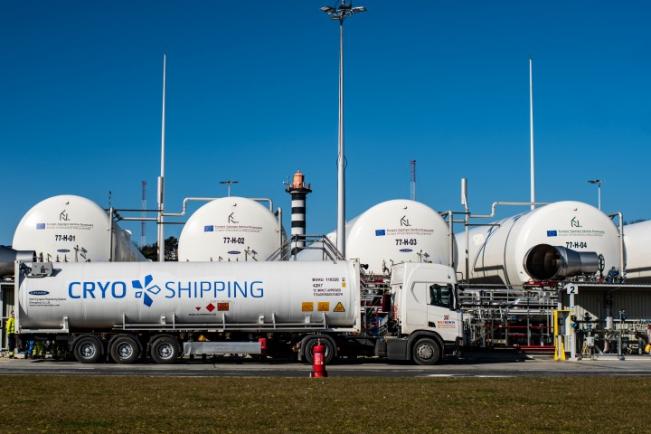