McDermott and Baker Hughes, a GE company (BHGE), have been awarded a contract by POSCO DAEWOO Corp. for phase two of the Shwe gas field development offshore Western Myanmar.

The McDermott-led consortium took part in a FEED competition in 2017. The successful execution of the FEED followed by the EPCIC tender led to the award of this project.

The EPCIC scope covers SURF and SPS for an eight-subsea-well development at a water depth of between 85 meters and 142 meters. It also covers brownfield modifications to tie-back the new subsea facilities to the existing Shwe platform.

“McDermott’s strategic alliance with BHGE is a combination of two leaders in subsea development,” said Ian Prescott, McDermott senior vice president for Asia Pacific. “Together, we offer comprehensive, cost-efficient and advanced technical solutions for our customers. McDermott’s expertise in executing large and complex EPCIC projects in Asia will help us deliver certainty during the next phase of this important gas field development.”

Graham Gillies, vice president-Subsea Production Systems & Services at BHGE, said: “Cost efficiency and productivity are top priorities for our customers and are fundamentally changing the way we work and partner across the industry to deliver the solutions they need. Through early engagement and close collaboration with POSCO DAEWOO, the consortium was able to offer the optimum solution. This win demonstrates the value the consortium can create through early engagement with customers, adoption of standardized technology solutions and efficiency of project execution.”

McDermott will undertake the EPCIC of SURF and brownfield modification scopes, using its regional center of excellence for project management and engineering in Kuala Lumpur, Malaysia. The SURF structures and production manifolds will be fabricated in the Asia Pacific region. McDermott also will execute the installation and commissioning phase, with field service engineering expertise and tooling support from BHGE’s base in Singapore. Installation of SURF and SPS components will be carried out using McDermott’s state of the art pipelay assets, including the Derrick Lay Vessel 2000.

McDermott’s portion of this award is classified as a large contract (between USD $50 million and USD $250 million), which will be reflected in its second quarter 2018 backlog. The contract’s final delivery is scheduled for 2022.

The Shwe field development consists of the Shwe, Shwe Phyu and Mya offshore gas fields, located in blocks A-1 and A-3 of the Bay of Bengal, Myanmar. The project is operated by POSCO DAEWOO Corp. and is being developed by a consortium of five companies, including POSCO DAEWOO Corp., Myanma Oil and Gas Enterprise, Oil and Natural Gas Corp. Videsh Limited, Gas Authority of India and Korea Gas Corporation. 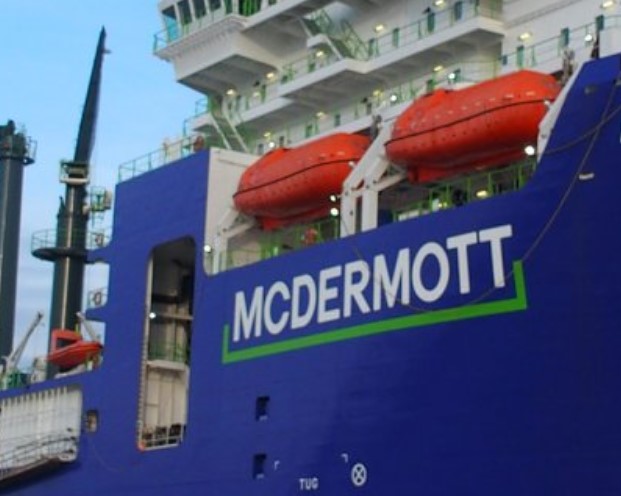