Advertisement
Back to overview
Home Fossil Energy No one in Brazil is keen on OPEC diet, Rystad says

No one in Brazil is keen on OPEC diet, Rystad says

At an October forum in Saudi Arabia, Brazil’s president Jair Bolsonaro suggested that he would like to see Brazil join OPEC. If such a marriage were to come to fruition, OPEC would be the clear winner and Brazil the loser by a long shot, energy intelligence group Rystad Energy said. 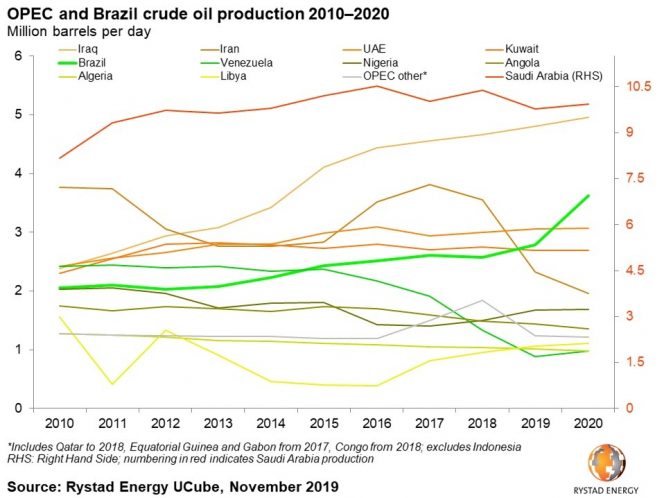 Brazil has experienced a tremendous spurt in crude oil production, propelled by the development of its pre-salt resources.

However, taking Brazil’s oil production to its current level certainly didn’t come cheap. Petrobras has paid over 78% of Brazil’s $396 billion bill for exploration (excluding dry well costs), development and operations from 2010 to 2018. This, in 2014, made Petrobras the world’s most indebted listed E&P company. Petrobras would be counting on the revenues from its growing production to help scale its debt mountain.

According to Rystad, OPEC-mandated production cuts at its projects would threaten Petrobras’ attempts to reduce gearing. Petrobras doesn’t need OPEC — it needs to reduce its still substantial debt.

The oilfield service industry doesn’t need OPEC — it would rather have increased production levels to ensure more business.

Brazil has been invited to join OPEC previously also; then the government stated that under Brazilian law it can’t interfere with production operations. So even the Brazilian government doesn’t really need OPEC. No one in Brazil appears keen on the OPEC diet, Rystad concluded.