Advertisement
Back to overview
Home Green marine North Sea Port: We Are Ready to Invest in Hydrogen as Fuel

Dutch-Belgian North Sea Port is looking to invest in hydrogen as fuel when opportunities arise, a representative of the port told World Maritime News at Offshore Energy Exhibition & Conference 2018 in Amsterdam.

“We recently commissioned a pipeline from Dow to Yara to transport hydrogen. We are already bunkering LNG vessels and when the right moment is there, we are ready also to invest in hydrogen as fuel or at least to make it available in our port area,” Peter Geertse, Commercial Manager of North Sea Port, said in an interview with our publication.

Earlier this year, the International Maritime Organization (IMO) adopted a climate change strategy for shipping which envisages a reduction of total greenhouse gas emissions by at least 50% by 2050. When asked about this strategy, Geertse said it is indirectly involved by supporting the port industry to move to more renewable energy sources. For example, companies such as Dow, Yara and ArcelorMittal have launched projects to reduce CO2 emissions and the port is supporting them.

This October, the first truck-to-ship LNG bunkering was carried out in Ghent. In Vlissingen, such operations have already been done.

“Right now, LNG bunkering is mainly done by truck which is more efficient because we don’t have an LNG terminal in our port. There is one in Rotterdam and Zeebrugge and those have enough capacity to serve the northwestern and southwestern regions of Europe,” Geertse explained.

He added that, for now, North Sea Port will offer mainly truck and barge bunkering as there are not many seagoing vessels using LNG.

Geertse also said that different bunker companies are present at the port and they are prepared for the upcoming IMO sulphur cap.

“You will see more and more low sulphur bunkering taking place in our port area as well. A lot of Scandinavian companies have their plans in our ports and they are very conscious of sustainability. They are insisting on scrubbers and new ways of fueling their vessels,” according to Geertse.

Announced in December 2017, the merger was completed seven months later. The process started a few years ago and involved extensive research and investigation. However, the merger has been completed relatively fast because of a strong support of the authorities and shareholders.

“There is still one decision to be made on Belgium’s side because the position of the port is a little bit different in Holland but we have already got some guarantees. What remains are the details and the formalities,” Geertse informed.

When asked about the experiences regarding the integration of the two organizations with Dutch and Flemish employees, Geertse replied: “It is still early to say anything because we are still in that process. The commercial part has already been integrated which I believe went well.”

According to Geertse, the good thing is that nobody would be laid off. Instead, the port is looking to hire new people as well.

“We already cooperate quite a lot and we are actually very close, especially the southern part of Zeeland is already very close to Belgium. When it comes to differences, they might feel funny – same language, but at the same time different expressions. But I think it will work out well.”

“This cross-border merger is unique on the continent. There is also one other port which merged and that is Malmö and Copenhagen. We will see whether other ports in Europe will be following our practice as well.”

Benefits of the integration

With regard to benefits North Sea Port expects to gain from the merger, Geertse said they can be primarily found in economies of scale.

In addition, benefits can be found in promoting the port: “Rather than spending money on two different ports in promoting ourselves, we now promote one port, which is a bigger port from the European perspective. There you can attract more customers and bigger companies as well.”

In order to remain competitive, North Sea Port collaborates with other ports, the Port of Rotterdam and the Port of Antwerp, among others. What is more, a number of innovative projects are planned at the port.

In support of these projects, digitalization is particularly important, Geertse believes: “We have to incorporate more digitalization in our port operation as everything will be more digitalized in the future. We will have to invest into that in the coming years. The first challenge for us is to integrate two different systems of the two former ports into one.”

Another segment which has to be tackled is vessel reporting which needs to be harmonized and made more efficient in the future. Moreover, systems related to internal processes like customer service and statistics need to be integrated. That will be the main challenges for North Sea Port’s IT department in the coming period, according to Geertse.

At the end of 2017, North Sea Port said it intended to increase its maritime traffic to 70 million tons by 2022. This goal might be achieved even earlier as the port already saw 53 million tons being transshipped via seagoing vessels during the first nine months of this year.

“We expect to achieve our goals even earlier. We were growing in the first nine months already by 8%, within the liquid bulk segment 13%,” Geertse commented.

So far, offshore wind has been a very successful segment for the port, especially when it comes to value.

“In terms of percentages, the container segment is the fastest growing, followed by dry bulk and liquid bulk. Those are the main drivers which are accounting more than for half of the total throughput.”

By 2020, a new sea lock in Terneuzen will be built to replace the middle of the three existing locks. Once completed, it will enable North Sea Port to accommodate larger ships.

“Currently, when a bulk vessel with ore is coming, we have to lighten it on the river before the vessel can enter because of the draft. With the new lock, we won’t have to lighten the vessel that much so wider and longer vessels can proceed. Same with the RoRo services — those are the bigger ships so we will be able to count on bigger ships.”

“Another remark on the growth of tons is that when we look at breakbulk and liquid bulk for instance in surrounding ports like Rotterdam, they are decreasing. They are decreasing for liquid bulk, while we are growing. That is because they are more depending on crude oil and we have more differentiated products.”

Impact of Brexit and market outlook

“We have some industries which are fully depending on the UK market, for instance companies such as CRo / Cobelfret. That is a car terminal in Vlissingen and exports mainly go to the UK. But on the other hand, as long as cars are not manufactured in the UK, they have to be imported anyway even if there will be import duties,” according to Geertse.

“We don’t have a real ferry service to the UK so we will not have trucks standing in line to do their customs formalities. However, from the UK there is quite a lot of interest to find alternative ports to start new ferry services because they expect congestion.”

He further said that there are opportunities from Brexit for new ferry services to start from other ports like North Sea Port. The port has been approached by several ferry companies but they are waiting for the outcomes of Brexit.

Additionally, containerization at the port is expected to grow.

“Containers are one of the developing segments. Part of our recent business, for example, is more and more containerized. So we have to be prepared for that as well,” Geertse concluded.

“I think there will be opportunities as well for ports but nobody knows what will happen with customs, could be chaos as well.”

“We will definitely continue to concentrate on our niche markets, but also focus on the bulk markets. We see some growth coming from the agri bulk in the future and we will more diversify in the liquid bulk and also in the renewables – biomass.”

Geertse added he expects quite a lot from the offshore wind segment in the coming years amid the anticipated development of the portfolio of wind parks in the next ten to twenty years. 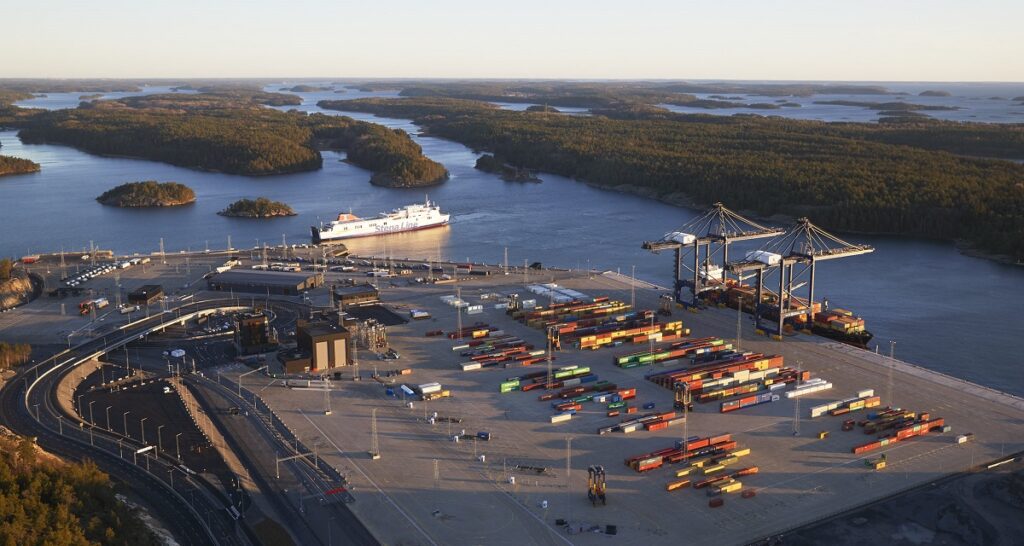 Ports of Stockholm to invest in hydrogen
Posted: 23 days ago
Ports of Halifax and Hamburg forge ties on hydrogen, green energy corridor
Posted: 2 days ago
DNV: Hydrogen likely to have limited uptake in deep-sea shipping
Posted: 19 days ago