“The great efforts of all those involved and the experience we gained from the construction of the first two vessels in this series has resulted in a very good flow in this project from start to finish,” says Sindre Rotevatn, Acting Managing Director of Ulstein Verft.

Blue Ship Invest, a wholly-owned company in Ulstein Group, has entered into an agreement with Atlantic Offshore on technical and commercial management of ‘Blue Power’.

“We’re very pleased with this agreement, and given the very positive feedback on vessel performance of ‘Blue Fighter’ and ‘Blue Prosper’, we are full of expectations for ‘Blue Power’,” says Gunvor Ulstein, CEO of Ulstein Group and Managing Director of Ulstein Shipping.

Efficiency and flexibility have been the focus in the development of the PX121 design. With optimised tank capacities and flexible and segregated tank arrangements, the multifunctional vessel is suitable for many types of supply contracts. The ship is adapted to the requirements for longer and deeper boreholes and activities further from shore. In addition to tanks for oil, water and drilling fluids, the vessel has four stainless steel tanks for flammable liquids.

The vessel’s X-BOW® hull line design is particularly advantageous for this type of vessel. The X-BOW offers efficiency over a wide draught range, which is important for PSVs as they frequently operate with varying loads. Moreover, the X-BOW has unique, beneficial qualities in terms of motion and propulsion efficiency in heavy seas. Both the hull and choice of propulsion system make the vessel particularly suited for North Sea and North Atlantic conditions. The vessel is equipped with a dynamic positioning system IMO class II.

The ship has a length of 83.4 metres and a beam of 18 metres. It has a cargo deck of 850 square metres and a load capacity of 4200 tonnes (dwt). The ship meets the requirements of DNV’s Clean Design notation and is prepared for fire-fighting class Fi-Fi II. It has a maximum speed of circa 16 knots and modern accommodation for 24 persons.

The remaining three vessels will be delivered later this year and all six vessels are for sale.

Also you can watch a video of the ‘Blue Fighter’ PSV delivered last year. The Blue Fighter is the first PSV newbuilding of the PX121 design from ULSTEIN® 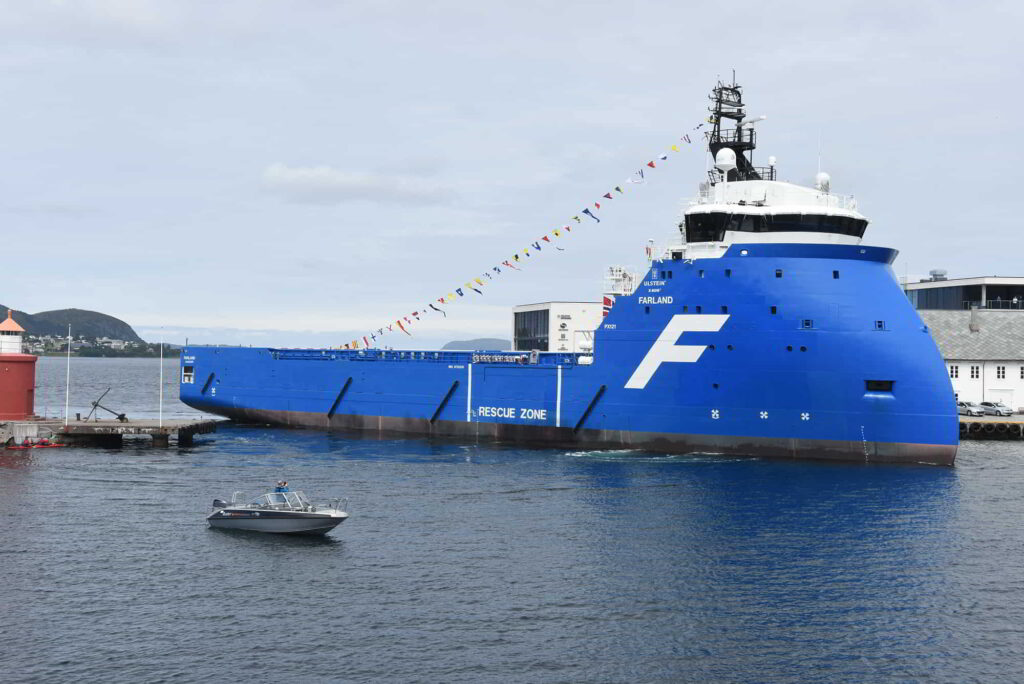