Nova Scotia welcomed BP Exploration Canada’s fleet of 10 exploration vessels on May 13, to kick off one of the largest seismic programs in the world.

During the event, Premier Stephen McNeil announced a $12-million investment in geoscience research to help the offshore sector grow. The investment will build on the Play Fairway Analysis, which provided a geological map of Nova Scotia’s offshore potential.

“The Play Fairway Analysis work undertaken by the province of Nova Scotia was the foundation for our exploration team’s decision to bid on these leases in late 2012,” said Mr. Willis. “We are delighted to be working with great people in Nova Scotia and BP looks forward to getting our seismic acquisition program, the Tangier 3D Seismic Survey, safely underway.”

BP Exploration Canada’s 14,000 square-kilometre lease shows international oil and gas companies are considering Nova Scotia, and the way the province is developing the offshore is working.

The report from the Nova Scotia Commission on Building Our New Economy, led by Ray Ivany, recommended economic development focus on parts of the economy with export potential, including oil and gas.

“Our oil and gas sector represents one of the single biggest opportunities for the future economic growth of our province,” said Premier McNeil. “We’ve only just begun to explore the full potential of our offshore. Our investment, combined with private-sector efforts, will help maximize the benefits for Nova Scotians.”

The province, with the private sector and research community, developed the Play Fairway Analysis to identify Nova Scotia’s offshore petroleum resources. It found a potential of more than 120-trillion cubic feet of gas and eight-billion barrels of oil.

The province is investing $12 million over the next four years for geoscience research before the Canada Nova Scotia Offshore Petroleum Board’s next calls for bids.

“Government has taken a very deliberate approach to developing our offshore sector,” said Energy Minister Andrew Younger, who toured the seismic vessel with the premier and other guests. “As each new call for bids comes up, we are committed to doing the research necessary to ensure the geoscience is there for industry. The approach works, and we’re seeing the results.”

Shell Canada and BP Exploration Canada have each committed to $1-billion exploration bids in Nova Scotia. Shell Canada completed its seismic work last year, and is reviewing the data collected over 10,000 square kilometres. It also plans to drill up to seven exploration wells, starting in 2015.

BP Exploration Canada will use its 3D offshore seismic vessels to study the subsurface geology of its offshore licences, for future exploration plans. 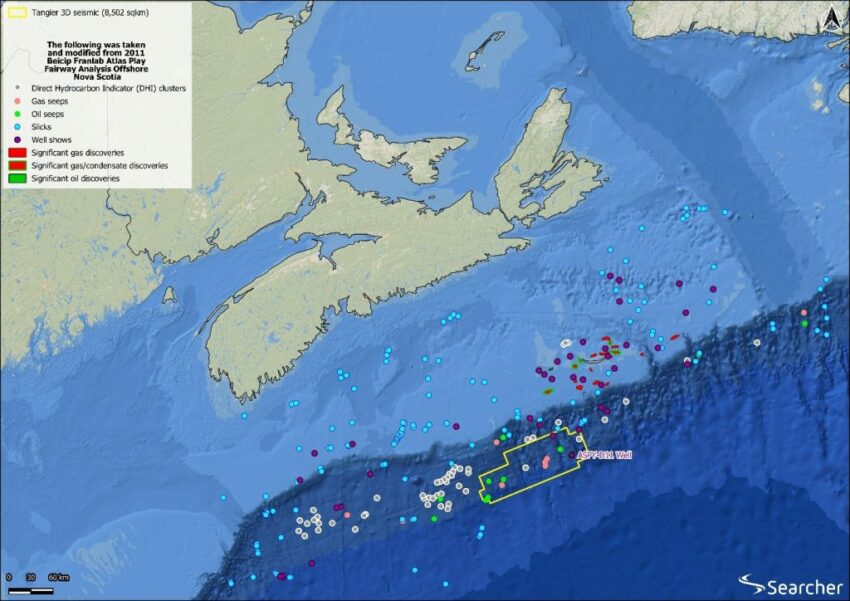