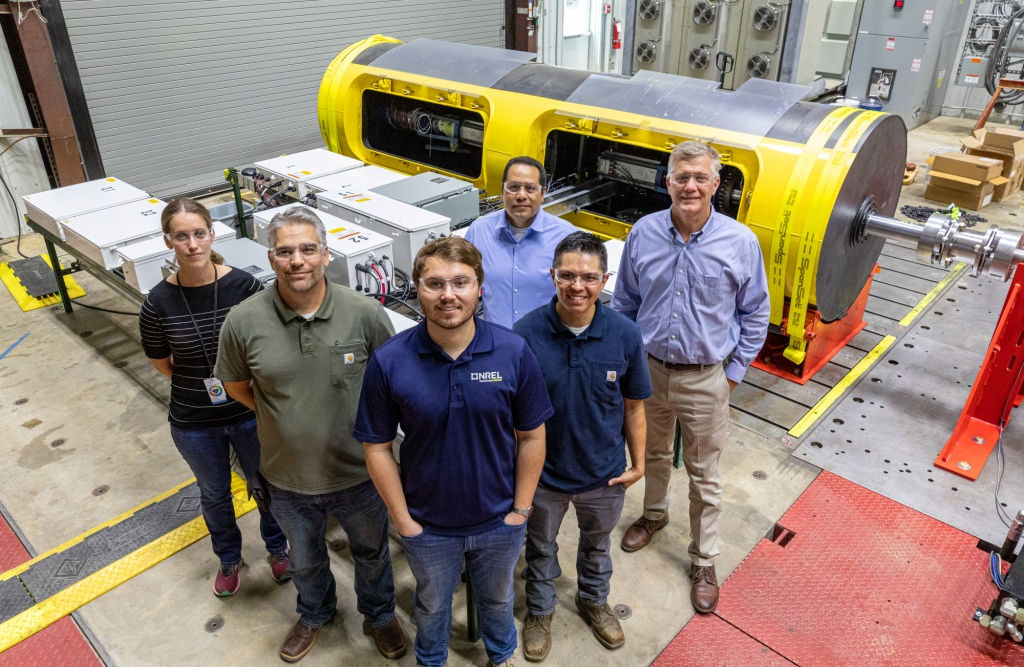 Photo: NREL researchers pictured in front of the SeaRAY AOPS (Courtesy of NREL/Photo by Vern Slocum)

The National Renewable Energy Laboratory (NREL) has been working with the U.S.-based marine energy company C-Power on the integration of its novel field data collection and control system in the SeaRAY device ahead of upcoming sea trials in Hawaii.

An autonomous, wave-powered, renewable energy device – called the SeaRAY autonomous offshore power system (AOPS) – could power offshore work and help protect our oceans and climate at the same time, according to developers.

The SeaRAY AOPS not only makes and stores clean, carbon-free energy, but it also shares data with the offshore vehicles it powers.

To prove the SeaRAY AOPS can help power the so-called blue economy, C-Power partnered with NREL and the U.S. Department of Energy Water Power Technologies Office to prepare the device for its first open ocean trial.

Reenst Lesemann, C-Power’s chief executive officer, said: “You can think about an AOPS as a charging station, a data server, and a cell tower out in the ocean.

“NREL has a critical role in this project. They’re not only helping provide the brains of the AOPS but also helping with testing and debugging the system before we get into the water”.

Originally designed to standardize and increase the quality and breadth of field data collection, the first MODAQ could do basic data acquisition and condition monitoring (meaning that it kept track of how a wave energy device performed).

SeaRAY’s fortified MODAQ is yet another acronym: a supervisory control and data acquisition, or SCADA, system. Now, the tool not only collects field data, but it also sends information to the cloud and connects to the web so customers can watch a live SeaRAY performance, receive data on how a device is functioning, or even control those functions from a desk halfway around the world, according to NREL.

Andrew Simms, a research technician at NREL, said: “Our ultimate goal is to provide a fast, reliable, and robust data acquisition and control system that can upload, process, and display data to a client in near-real time”.

To make sure the SeaRAY AOPS is ready for a six-month oceanic trial at the U.S. Navy Wave Energy Test Site (WETS) in Hawaii, NREL researchers are simulating rolling ocean movements at the laboratory’s Flatirons Campus in Colorado.

With MODAQ onboard as well, the team will also check that SeaRAY AOPS can operate as intended while rocking with ocean waves, while making sure the system is fully protected from a corrosive and violent ocean.

In Hawaii, project partners, including Saab, one of the world-leading companies in electric underwater robotics, the National Oceanic and Atmospheric Administration (NOAA), and BioSonics, will pair the SeaRAY AOPS with their electronics, which collect data on methane and carbon levels, fish activity, and more.

Normally, autonomous underwater vehicles like Saab’s need power from a topside ship that emits about 7,000 cars’ worth of carbon dioxide per year – the SeaRAY can prevent those emissions, NREL said.

“With Saab, we’re looking to show that you can avoid that carbon dioxide production and, at the same time, reduce costs and operational complexity while enabling autonomous operations that are not possible today”, Lesemann added.

The SeaRAY, equipped with about 70 sensors that collect massive amounts of data, is expected to be deployed this autumn.

SeaRAY’s wave energy converter uses two floats, one on each side, that roll with ocean waves and connect to a power take-off (PTO) system. That system then runs a generator, which connects to batteries on the seafloor, a storage system that NREL will also test out before the sea trial.

Once the open ocean field test is complete, the MODAQ system will provide the C-Power team with data to further improve the SeaRAY device and make it even smaller, more efficient, and more adaptable for a wider range of applications, NREL said.