Once the third of these so-called offshore chasers joins the fleet in January 2015, all of Groen’s five custom built chasers will have been built by Damen yard Maaskant.

Prior to ordering the three 35-metre Seismic Research Support Vessels of this current ‘7’-class in November 2013, Rederij Groen of Scheveningen (the Netherlands) had already commissioned the Maaskant-built SRSV’s ‘Astra-G’ and ‘Aquarius-G’. These 40 metre sister vessels were delivered early 2013.

“We have ordered the latest three chasers on the basis of the satisfactory performance to design by these first two newbuilds”, owner and director Henk Groen comments. “It doesn’t end here”, Frits van Dongen, director of Maaskant Shipyards Stellendam adds. “Before the ‘Astra-G’ and ‘Aquarius-G’ were commissioned – as the first purpose built offshore chasers ever, worldwide! – Rederij Groen’s Seismic Research Support Vessels involved converted fishing trawlers. As these were converted by us, we can honestly say that we’ve built most of their fleet of offshore chasers.”

Also called guard vessels, their major task is to ensure that other shipping, mainly fishing ships, will keep distance from seismic survey vessels engaged in offshore exploration. So to literally chase them off. The trawlers’ nets might otherwise damage the costly seismic equipment being trailed.

The ‘Astra-G and Aquarius-G’ were designed by Maaskant, Groen and Saltwater Engineering together. A design from Vestvaerftet in Denmark was chosen for the new series of three at the request of charterers Dolphin Geophysical. Whereas the 35 metre Danish design resembles the fishing trawler more, the 40-metre Dutch design offers more free deck space. The general deck arrangement is, however, similar to Groen’s first two SRSV’s, which has proven to be efficient.

The ‘7-Oceans’ (delivered by Maaskant Shipyards in July 2014 as the first of the series), the ‘7-Waves’ and the third sister vessel due in January 2015 have two Veth azimuth stern drives (ASD), each driven by a 500 kW electric motor. A 90 kW bow thruster is fitted. Power is supplied by three Caterpillar C18 generator sets of 525 kVA. The electronic system complies with an A4 service area, for operations in Arctic waters. 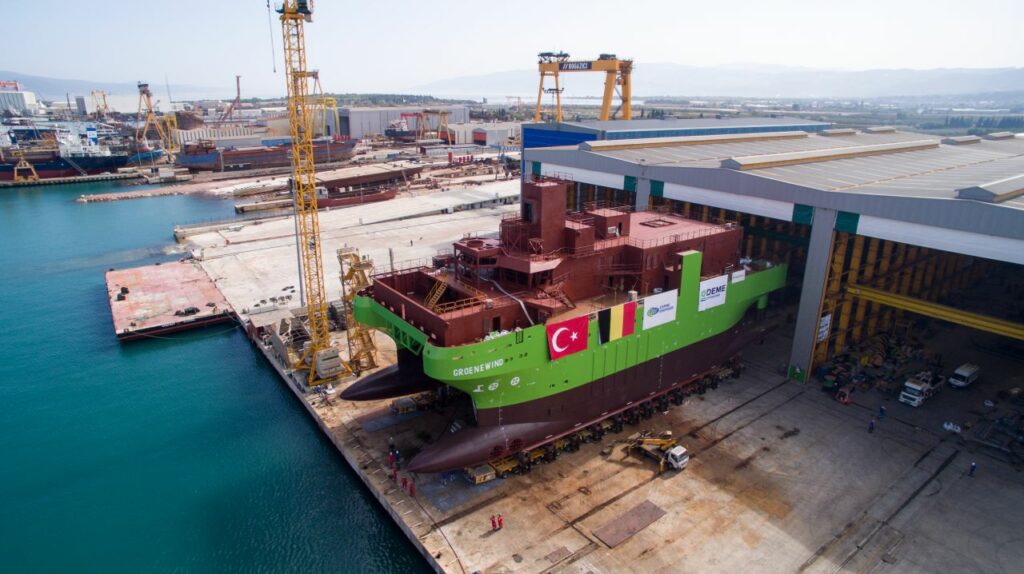