A colossal containership has hit the waters at Daewoo Shipbuilding and Marine Engineering (DSME) yard in Geoje, South Korea.

The 23,660 TEU vessel goes under the name Baltic Express and it is being built for the German liner shipping major Hapag-Lloyd. Berlin Express is an LNG dual-fuel containership Hapag ordered from DSME back in 2020, and it is slated for delivery later this year.

A Hapag-Lloyd Spokesperson told Offshore Energy that the ship would be delivered at the end of the second quarter of 2023.

The ship, like its five sister vessels, will be powered by MAN Energy System’s ME-GI engines.

Two months ago, our editorial team reported on the completion of the installation of an LNG-fuelled engine on the company’s 23,660 TEU Hamburg Express set for delivery at the end of April 2023.

The 2,246-tonne engine was installed with the help of a floating crane deployed at the Daewoo Shipbuilding and Marine Engineering yard (DSME).

The type MAN-HHI G95ME-C.10.5-GI high-pressure type engines will be able to operate on ‘green LNG’ in the future, Hapag-Lloyd confirmed to Offshore Energy.

Hapag-Lloyd has 22 newbuildings with more than 400,000 TEU in the making. These include twelve 23,500 + TEU vessels featuring dual-fuel LNG propulsion and ten ships of 13,000 TEU capacity.

The twelve LNG-powered ULCVs were ordered in late 2020 and mid-2021. The total investment value of the order stands at around $2 billion.

Once completed, the 400-meter-long and 61-meter-wide newbuilds will be among the largest ships in the world.

The last vessel from the series is expeted to be completed and delivered on 31 December 2024.

Upon delivery, the newbuilds will be deployed on the Europe-Far East routes as part of THE Alliance.

Hapag-Lloyd’s CEO Rolf Habben Jensen, believes that LNG will be just a part of the energy transition puzzle together with biofuels, carbon capture, methanol, and further down the line ammonia, hydrogen, and maybe even nuclear propulsion. 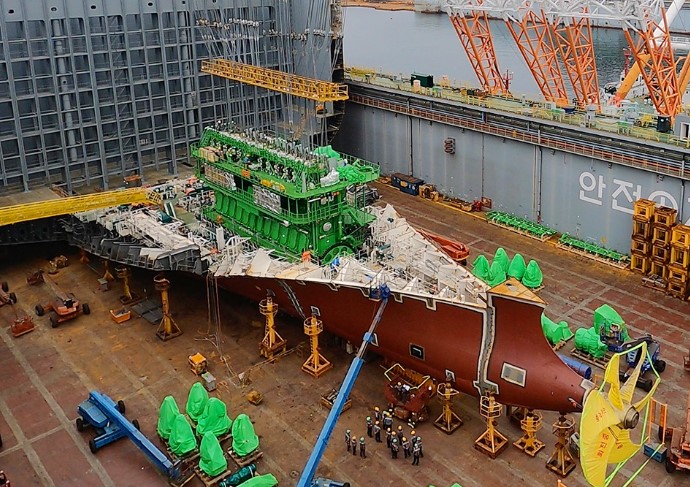