Development of modern technology has ushered in a myriad of changes into the maritime industry. Introduction of complex navigation softwares aboard ships, giant remotely-operated cranes to handle cargo and automated equipment at ports has made navigation and cargo handling operations at ports much easier and more efficient. But what does this mean for the human factor and workers whose jobs are being taken over by the machines?

World Maritime News spoke with dockers’ representatives of the European Transport Workers’ Federation (ETF) to hear whether modern technology can be seen as a friend or foe to workers at ports.

WMN: How will port automation, especially in Europe, influence the workers’ job guarantee? What is ETF’s stance on the battle between the unions and the decreasing need for workers as ports become smarter?

Samuelsen: It all depends of course on how automation processes are dealt with. We are not here to deny technological progress, but we should first of all take a step back and analyse why and how decisions on automating ports are done. What is certain is that we will always oppose automation that is done with union-busting purposes. We do not believe that automation is the ultimate solution, in some terminals it may be needed, but there should always be an ex-ante thorough analysis of the consequences in terms of employment and working conditions, economic profitability, flexibility.

Ports with less workers or without workers are not necessarily smarter: we have in Europe cases of traditional terminals that are much more efficient and profitable than automated ones.

Automation is NOT the ultimate solution

For the ETF one thing is clear: the introduction of automation, in both existing and new terminals, has to be discussed and negotiated with the workers, and this has to be done well ahead the process is started. In some European ports this was done successfully, and we could make sure that the impact on workers was mitigated and that benefits coming from the automated facilities in terms of enhanced productivity were shared with the employees. Moreover, even if in general there is a loss of employment, in most automated terminals the number of workers required by the operations is always higher than expected. Certainly, job profiles change and for this we need to accompany the process with tailor-made training programmes that allow workers to work in a changing environment.

WMN: Can increased cargo volumes/industry growth at ports and terminals have any effect on the protection of jobs? What is the best way for workers’ jobs to be secured?

Seebold: We do not see growth and consequent increasing in cargo in the short/medium term. This of course has consequences on the protection of jobs in terms of job security and number of people employed, but also on working conditions.

In our opinion there are two ways to protect jobs in this framework. The first is collective bargaining: collective labour agreements are for us the legitimate tool allowing to guarantee good working conditions and a stable framework for employment, notably via the inclusion of ‘automation clauses’ through which employers and unions can establish the procedures to be followed in case automation is introduced. In order to be effective collective bargaining has to cover all workers in the sector.

The second tool is the establishment of labour schemes or labour pools. We find very different ways of setting up and managing labour pools across Europe, but the common feature is that they allow coupling the flexibility needed by cargo handling operations, both in terms of peaks and of availability of trained workers, with employment continuity. This is particularly relevant in the current context, where cargo handling operations have to adapt to the growing size of ships.

WMN: What is ETF’s stand on the recently held strike in Rotterdam? Could a solution to the talks be reached in the near future?

Samuelsen: The ETF and its members fully supported the Dutch members in their fight. We have seen an extraordinary expression of solidarity from all over the world, and in particular from the trade unions in the North Range. All our members are looking at Rotterdam and at how the situation will evolve. Strike is always the ultimate step that unions take, but in this case the unions found no other possible ways forward. Talks with the employers and the port authority were stagnating, and there seemed to be no willingness to find a shared and meaningful solution.

WMN: What does ETF expect to result from the talks between the unions and the port and employers? Are there any updates on the talks?

Stam: After some talks following the strike, negotiations are at present on hold. Last week we lost the court case against APMT Rotterdam and APMT Maasvlakte II. In our view they have not respected what was stated in the collective bargaining agreements that we have signed with them. The two dockworkers’ unions, FNV Havens and CNV Vakmensen started a court case because APMTR and APMT MV II made a deal with the works council of APMTR the night before the 24-hour strike on 7 January. The point is that the problems affect all workers in the container sector, and all of them have agreed to strike – not only those employed by APMTR and APMT MV II. The Unions will appeal the ruling that was recently published.

Are benefits from building and running fully automated terminals higher than their costs?

On sectoral level we seek an agreement that allows tackling the problems coming from the combination of overcapacity, automation, growing size of ships, decreasing cargo volumes, rather than having a deal with one company.

We were on the right track with Port Authority and employers. But APMTR is now negotiating backwards with the help of the Works Council. This is a real problem for us because we in Rotterdam, contrary to other European ports, do not have an industry-wide agreement. We have been trying to ask for it for long time, but employers are reluctant to have talks at sectoral level. We see this as a blind choice as we think that not only the workers, but the sector as a whole would benefit from a level playing field in working conditions.

WMN: What other social consequences would result from full automation of ports? How far away is this scenario?

Seebold: We believe that there is a need to carefully consider broader issues: are benefits from building and running fully automated terminals higher than their costs? Next, when taking decisions on building fully automated terminals, it should be considered that all the jobs that are lost are translated into lower taxes for the port cities and regions and for the state as a whole. Who’s going to pay for the infrastructure then? We should also ask ourselves if it is meaningful to invest in activities that do not generate jobs. Does it make sense to make huge investments if these are not translated into more welfare and employment?

How would you describe the current situation in EU ports and what would you say are the key issues workers face aside to those related to automation?

Seebold: In many EU ports we are experiencing attempts to weaken workers’ power and influence. This is based on the wrong assumption that ports operations have to be cheaper and that labour is too expensive and/or that strong unions are an obstacle to competitiveness. Already for many years the focus is on efficiency and it was campaigned so hard that European ports being inefficient and too expensive that this is now perceived as the truth. We strongly disagree with this rhetoric.

Problems affecting European ports can be very diverse and we certainly don’t believe that legal cases, legislative initiatives and policies aimed at, or having as a consequence, lowering labour conditions are acceptable to us.

We are seeing ports where workers are denied a collective bargaining agreement by a management that act according to a 19th century’s industrial relations style, the situation in DCT Gdansk for example. We have continuous attempts to breach collective agreements from shipping companies that do self-handling, such as the case of feeder vessels in the North Sea and the Baltic area.

In some ports, outsourcing is being used to use cheap, non-trained labour, like in the port of Koper. In the North range ports are struggling to get cargo and yet new projects are being developed.

Our Mediterranean ports have to compete with non-EU ports that are sometimes co-funded with EU money. Last, but certainly not least, changes in maritime transport, such as the growing size of ships, are imposing heavy and costly burdens on the cargo-handling sector and on the workers in particular. 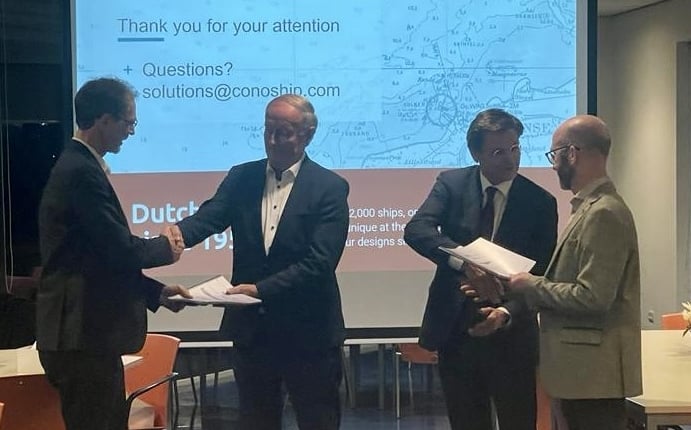