Germany’s Port of Kiel has inaugurated the new shore power facility in an effort to reduce hundreds of tons of CO2 emissions and become one of the greenest ports in Europe.

On 9 December 2020, Kiel’s Mayor Ulf Kämpfer and City Councillor Doris Grondke presented the LED wall at the new onshore power supply plant building at the Ostseekai Terminal together with the Managing Director at the Port of Kiel, Dirk Claus, as well as architects and lighting designers.

“Climate protection is one of our priority goals and I am pleased that we take another important step with the new onshore power supply plant,” Kämpfer said.

“The Port of Kiel thus makes a major contribution to the realisation of our climate protection strategy – the 100% Climate Protection Masterplan. The onshore power supply plant is an important milestone on the way to become the most ecological port in Europe.”

The facility was co-funded by the state government of Schleswig-Holstein (€8.9 million) and the EU (€1.26 million). In addition, Germany’s federal government recently agreed on a political package to decrease the user prices for on-shore electricity significantly.

“The planned decrease of user prices for shore side electricity is an important step for the competitiveness of environmentally- and climate-friendly technologies in Northern Europe,” Ron Gerlach, Managing Director, Stena Line Germany, noted.

From next year onwards, two vessels can take eco-power at once, i.e. a cruise ship and a ferry.

“As from January, we will cover 44% of the energy demand by the vessels berthing in the port of Kiel in an emission-free and climate-neutral way. In two years, it is supposed to be 60 to 70%,” Claus commented.

In May last year, the Port of Kiel also opened its first shore-based power supply plant for commercial vessels at the Norwegenkai. This enabled Color Line’s big cruise-ferries docking in the port to be supplied with emission-free electric power.

The inauguration also marks the official start of the onshore power supply for Swedish ferry operator Stena Line in Kiel.

The new connection in Kiel will reduce the CO2 emissions from the two vessels Stena Scandinavica and Stena Germanica with 2,700 tonnes per year.

Aside from Kiel, Stena Line has the possibility to connect to shore power supply at its two terminals in Göteborg, as well as in Karlskrona, Norvik, Trelleborg and Hoek van Holland, thus saving 13,000 tonnes of CO2 per year in its network.

Of the 36 vessels in the Stena Line fleet, 14 are now equipped with High Voltage Shore Connection systems (HVSC).

“Shore power supply is important for us for two reasons: First, we want to have an immediate positive impact on the air quality in the ports we use. Secondly, we expect an even higher share of electrification in ports in the future – at cars, trucks, port vehicles and not the least at ships,” Niclas Mårtensson, CEO Stena Line and member of the Swedish Government Electrification Commission, explained.

“With our battery and power bank projects, we develop our ferry services further in that direction constantly and we learn something new each day. In 2030, we expect to launch a 100% battery powered and fossil free vessel.” 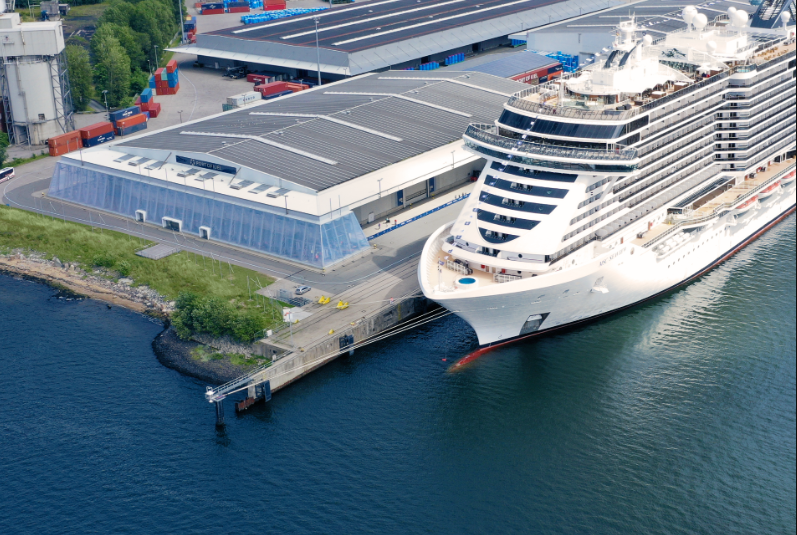