SSA Marine (SSA), which operates three container terminals at the US Port of Long Beach, has become the first terminal operator at the port to transition its fossil-fueled cargo-handling equipment fleet to renewable diesel fuel.

As informed, the move is expected to achieve a 68% reduction in greenhouse gas emissions across SSA’s Long Beach terminals.

The change involves more than 230 pieces of equipment across the company’s Long Beach terminals. SSA voluntarily converted its fueling to support the goals of the Clean Air Action Plan, which calls for greenhouse gas emissions to be 40% below 1990 levels by 2030.

“We know people look to the Port of Long Beach and our partners to set an example when it comes to sustainability,” Steven Neal, Long Beach Harbor Commission President, said.

“This is what can be done immediately to reduce greenhouse gases while new technologies are developed to reach our ultimate goal of zero emissions. Thank you to SSA for this transformation.”

Renewable diesel has the same chemical energy as traditional diesel fuel but is synthesized from sources such as animal fat from food wastes, used cooking oil and soybean oil.

In addition to its port-wide renewable fuel transition, SSA is working on other initiatives to transition its cargo-handling fleet to zero emissions by 2030. At Pier J, the company recently completed a demonstration of two battery-electric top handlers, and is converting nine rubber-tired gantry cranes into fully electric. Six are already in operation. The remaining three will be converted by early 2022. In mid-2022, SSA’s terminal at Pier C will deploy 33 zero-emission yard tractors with supporting infrastructure. SSA also operates a terminal at Pier A.

The Port of Long Beach, a gateway for trans­-Pacific trade, recently said it achieved all of the 2023 emission-reduction goals outlined in the San Pedro Bay Ports CAAP, despite moving record volumes of containerized cargo.

The port also plans to start collecting a Clean Truck Fund Rate in 2022 in an effort to support its goal of a zero-emission truck fleet by 2035. 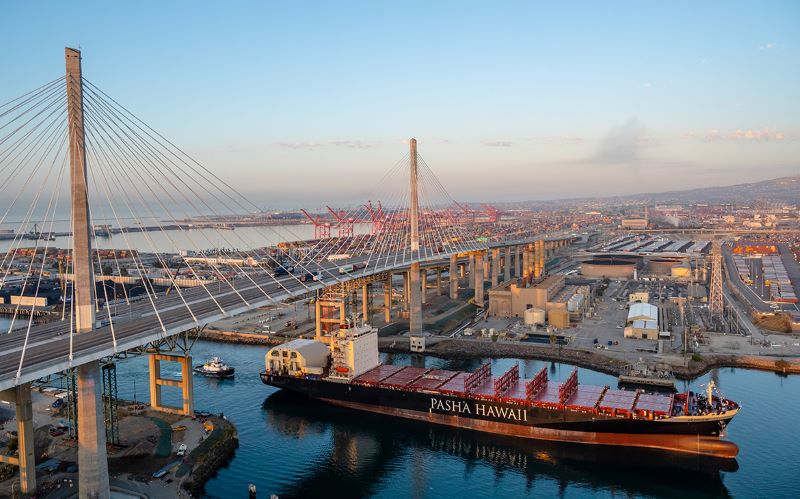