The Port of Rotterdam Authority has revealed that it will test drones to conduct sea-going and inland shipping inspections to tackle pollution.

The drones selected for these trials are designed by Dutch manufacturer Avy. The Avy Aera 3 have a wing span of 2.40 metres, a cruise speed of 90 kilometres per hour, and a 95-kilometre range at low energy consumption.

Two or three drones would suffice to cover the entire port area and have a drone over the spot quickly when an incident occurs, the port authority emphasized. If the drone detects an open tank filler cap, this might be an indication of illegal degassing by the vessel and call for taking a closer look.

Additionally, this drone can carry small cargoes of up to 3 kilos, such as refrigerated medical supplies, vessel parts, or cargo samples.

The vessels are planned to take off automatically from a docking station installed at the Rotterdam-Rijnmond Pilotage Service at Pistoolhaven. In the next few months, they will monitor the area near Europoort and the western Maasvlakte extension which includes container and break-bulk terminals.

Drones have become increasingly common for a variety of maritime operations. Last month, Singapore-based tanker owner Hafnia Tankers entered into an agreement with compatriot F-Drones to use drones for the delivery of goods to the company’s vessels. The deal builds on the trials of the drone service carried out in Singapore in 2020 when Hafnia used F-drones to deliver goods to vessels anchored in Singapore.

Meanwhile, European Maritime Safety Agency (EMSA) used drones to perform large-scale emissions monitoring campaign. Over a three-month period, a specially equipped drone measured the sulphur content in the exhaust plumes of ships transiting the Baltic Sea in order to be able to detect violations of the applicable limits.

The International Maritime Organization introduced the global sulphur cap in 2020, which limited the use of sulphur in fuel oil used on board ships operating outside of designated emission control areas to 0.50 percent m/m down from 3.50 percent m/m limit. Recent findings by the National Aeronautics and Space Administration (NASA) showed that the global sulphur cap reduced artificial “ship track” clouds to record-low levels. 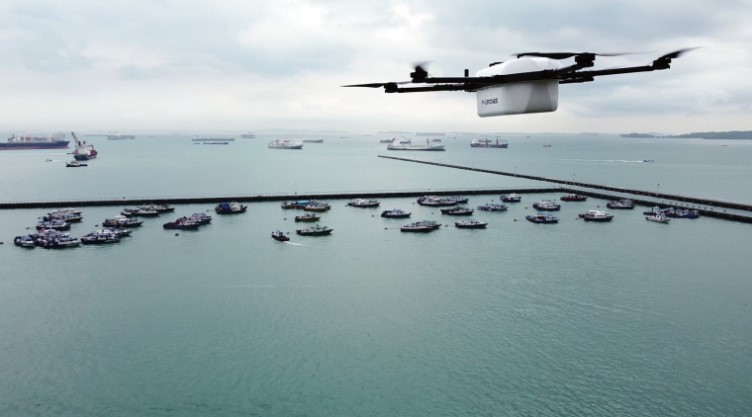