Singapore-based tanker owner and operator Hafnia Tankers has entered into an agreement with compatriot F-Drones to use drones for the delivery of goods to the company’s vessels.

Under the agreement signed in September, Hafnia will use drones for deliveries to Singapore-based vessels, the company said adding that the deliveries would depend on the right circumstances.

“F-drones will enable Hafnia to rely less on the use of boats to deliver smaller loads to vessels, and thereby reduce CO2 emissions with every trip,” the company said.

The deal builds on the trials of the drone service carried out in Singapore in 2020 when Hafnia used F-drones to deliver goods to vessels anchored in Singapore.

Hafnia cooperated with Eastern Pacific Shipping and F-drones in May 2020 enabling the first drone deliveries to and from a laden tanker.

Hafnia conducted a successful test of using drones to deliver small payloads to Hafnia vessels anchored in Singapore in June 2020 as well. The trial involved test fights to and from BW Zambessi oil product tanker, which was anchored in Singapore. This partnership enabled F-Drones with a testing platform to further their long-range drone delivery offerings.

The company has also tested out its system in night-time operations in cooperation with Berge Bulk.

Hafnia added that further tests were carried out in 2022 with F-Drones’ new drones with higher range, the success of which enabled the duo to seal the deal earlier this month.

The company’s proprietary drone system was initially able to carry 10 kg and now the drones are capable of ultimately delivering 100kg loads to offshore platforms and vessels up to 100km away. 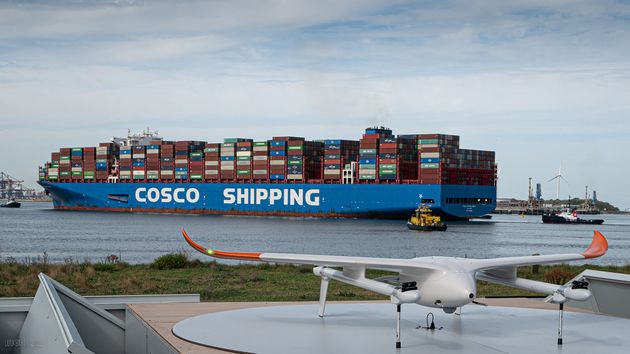