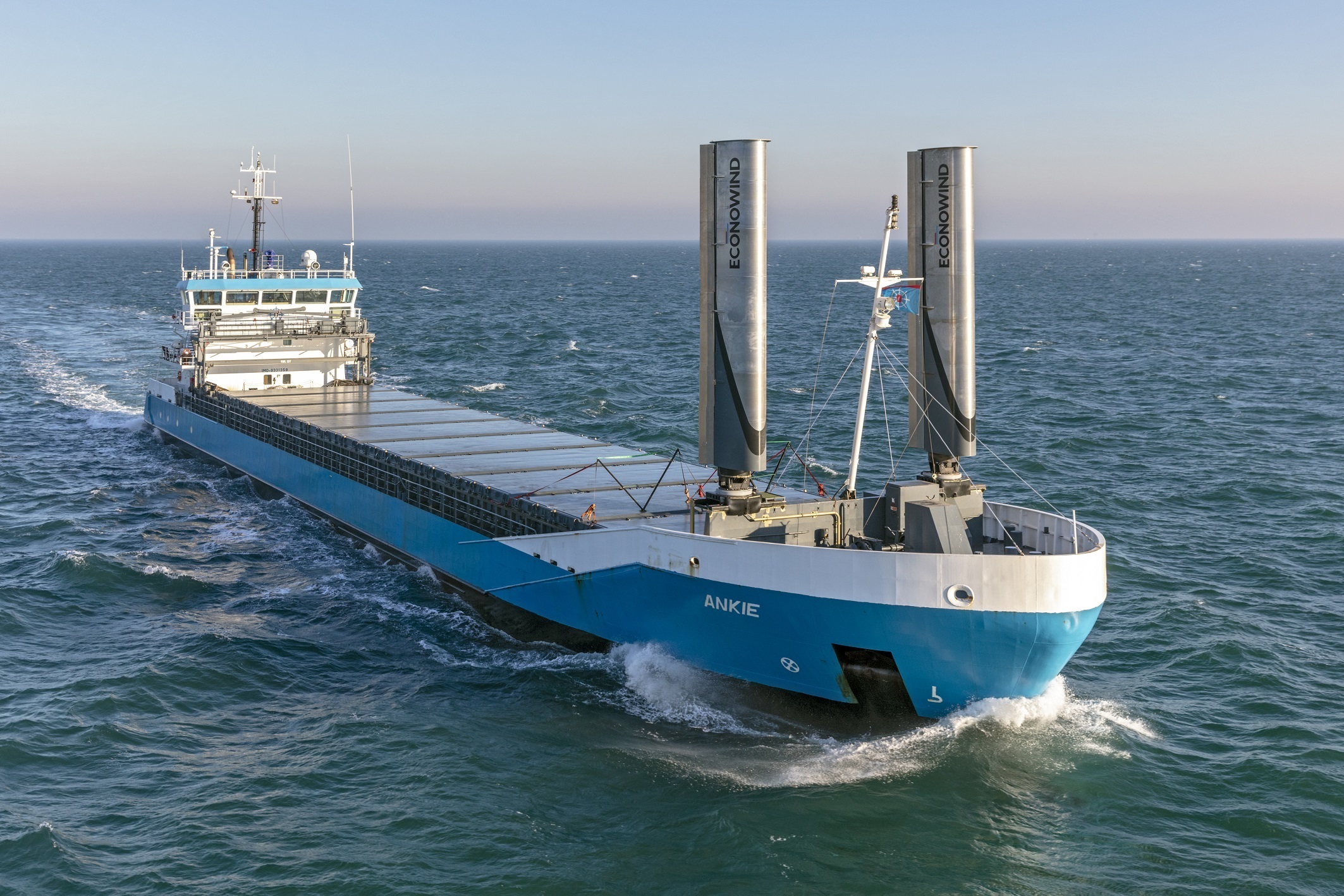 Rapid scaling of wind propulsion across the fleet in the next 10 years could not only pay for itself but could go a very long way to releasing the funds required to go beyond IMO2050 and even deliver full decarbonization for the fleet, Gavin Allwright, Secretary-General at the International Windship Association claims in his opinion piece.

“By installing substantial wind propulsion systems across the 60,000 large vessel fleet this decade and subsequent replacement vessels using wind propulsion systems as standard, the reduction in fuel use prior to 2050 would be equal to the amount being forecast that is required to not just meet the IMO2050 target of 50% reduction, but potentially cover the entire decarbonisation ticket price,” he writes.

The scenario makes several assumptions to simplify the calculation. It assumes a static fleet size of 60,000 ships, burning through 300 million tons of fuel per year (1 billion tons of C02 emissions). It also uses today’s price of VLSFO in Rotterdam, which stands at $500/ton, as a baseline, which translates into a total bunker spend of roughly $150 billion per year.

Allwright assumes a 35% increase in fuel price over each decade starting in the 2030s, which is made up of inflation, the introduction of more expensive alternative fuels into the energy mix and carbon taxes being imposed within the next 10 years.

Reducing the industry’s greenhouse gas (GHG) emissions by 50% by 2050 is estimated to require approximately $1 trillion, according to a study by University Maritime Advisory Services (UMAS) and the Energy Transitions Commission (ETC).

The study shows that the annual average investment needed would be $40-60 billion over the next two decades, and to fully decarbonise the global shipping industry by 2050, an additional $400 billion of investment would be needed over 20 years, bringing the total to $1.4 -1.9 trillion.

The study also states that 87% of that investment would be required on land and was primarily focused on alternative, low carbon fuels.

“Nonetheless at $1.4 trillion, by my calculation this equates to just over $23 million per ship in operation today,” Allwright said.

A final base assumption is for the energy delivery from the full rollout of wind propulsion across the fleet to be at 20%. This includes retrofits, optimised newbuilds and benefits derived from some limited operational changes from speed or power limitation, weather routing for wind etc.

The average cost of installation has been put at $5 million per ship, bringing the total to an estimated $300 billion, factoring in the expected decrease in costs of these systems as these are mass produced for fleet deployments.

According to Allwright, here are the likely outcomes:

“2020s – the decade of rapid installation – the savings will be limited as many vessels are being installed and not operational throughout the decade, but if savings came in at 5% of the total $1.5 trillion bill, this would save $75 billion over these initial years. This is calculated without any fuel price increase from now until 2030.

2030s – retrofit installations are complete and many replacement vessels are enhanced/optimised wind or even primary wind. Fuel price rises 35% to a decade average of $675/ton thus a total spend of just over $200billion a year, reduced by 20% derived from wind, leaving $160billion/year. Thus wind saves the industry $405 billion in the 2030s.

Thus by 2050, the incorporation of fleet-wide wind propulsion, with an initial price tag of $300 billion would thus unlock roughly $1 trillion in fuel savings along with reducing the need to deliver such a large amount of alternative zero-emissions fuel to boot, so potentially shaving 10-20% from that headline cost too.”

The current number of large ocean-going vessels with wind propulsion systems installed stands at 11, with another one ‘wind-ready’.

Furthermore, there are 20+ smaller vessels under wind, including around 10 small cruise vessels with a traditional sail.

There are two more installations pending the end of Q1/early Q2, which have been slightly delayed due to COVID-19.

According to the International Windship Association (IWSA), there are also two new build vessels underway, one bulker with rotors, along with the Canopee newbuild RoRo set for delivery 2022.

Based on the current project announcements, the industry is expected to have over 40 vessels featuring wind propulsion by the end of 2022 or early 2023, IWSA estimates.

“We expect the first commercial installation for Airseas kite this year with Louis Dreyfus Armateur, and there are quite a few other commercial retrofits and demonstrator retrofits also in the pipeline for 2021/early 2022,” Allwright said.

Commenting on the five year outlook, IWSA said that its members are pretty well aligned to be delivering on the EU forecast of up to 10,700 installations by 2030.

Even though the pandemic has created some lag, the association members remain bullish that this is achievable.