Russia’s federal agency FSUE Rosmorport has signed a cooperation agreement with the LLC Novaya Pristan for the implementation of expansion projects in the seaport of Novorossiysk.

The parties agreed to cooperate on the development of design documentation for the construction and reconstruction of the facilities of federal and private property in the seaport. The project is included into the federal project “Development of seaports” of the transport part of the “Comprehensive Plan for the Modernization and Expansion of Trunk Infrastructure”.

Upon completion of the project, new berths, conveyor galleries for grain transportation and a transfer tower will be put into operation. The production capacity of the seaport of Novorossiysk will increase by 11.5 million tons, according to the partners.

The agreement new agreement, signed during the Transport Week 2021 Forum, is expected to contribute to the development of the country’s export potential, the creation of new vacancies and an increase in tax payments to the budgets of all levels of the Krasnodar Territory.

During the Transport Week 2021 Forum, the Russian federal agency has also signed an agreement to develop the first deepwater universal seaport complex in the Baltic Sea.

The project in the port of Primorsk is in line with the strategy of Russia to increase the port capacity of the Baltic Sea. 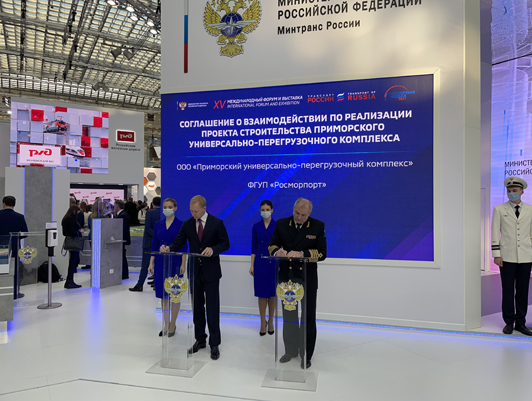