U.S. engineering company McDermott has revealed its modification plans to convert the Amazon construction vessel to an ultra-deepwater J-Lay vessel.

McDermott said on Tuesday that the modifications of the Amazon include a new J-Lay system that would allow the vessel to install hex-joints up to 24 inches in diameter.

The Amazon is operated by McDermott under a long-term bareboat charter that started in 2017. The vessel is equipped with twin 400 metric ton cranes and accommodations for 200 personnel.

The modifications will consist of removing the existing tower and replacing it with a J-Lay system with 1,500 tonnes of dynamic top tension on the tower, which will enable large subsea structures and hex sections of pipelines from 4.5 to 24 inches to be installed.

The modifications will consist of removing the existing tower and replacing it with a J-Lay system with 1,500 tonnes of dynamic top tension on the tower.

The Amazon modifications will include an integrated multi-joint facility, where single joints will be welded to form hex joints. The 10,000 tonnes of existing cargo space onboard will remove the requirement for onshore facilities to produce the multi-joints, enhancing the mobility of the vessel and reducing reliance on shore bases for support.

Dutch-based Royal IHC has been selected to design and build the J-Lay system and would perform overall management of the modification project. The original equipment manufacturers will be used for all modifications to the ship’s systems, including an additional five megawatts of power and pipe handling cranes, under the management of IHC.

Alan Marriott, global vice president of marine assets and operations, added: “The vessel is designed to be self-sufficient, allowing easy transition from project to project. The vessel is expected to provide pull-through opportunities for the rest of the McDermott subsea fleet.”

Initial engineering began on the project in October 2017 and transitioned into full engineering design in January 2018. McDermott will pay for the modification project primarily through an increased bareboat charter rate over an extended 12-year term once the modifications are complete. The Amazon owners have secured an export credit-backed senior loan facility from a group of lenders.

According to the company, the Amazon will be delivered to IHC in the Netherlands in August 2019 for a conversion period that is expected to last 10 months. Redelivery to McDermott is expected in the summer of 2020.

To remind, Offshore Merchant Partners Asset Yield L.P. acquired the Amazon in a joint venture with Northern Shipping Fund III L.P., in a sale and leaseback transaction with a subsidiary of McDermott International. 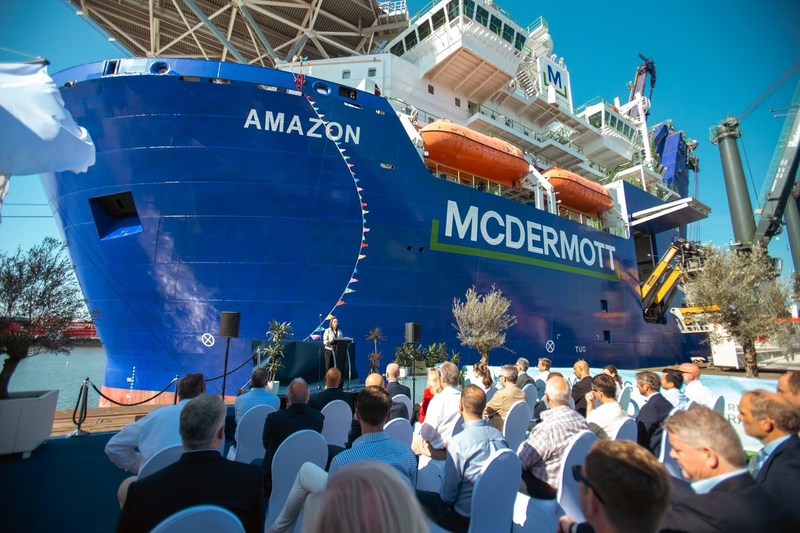