On 10 Dec. 2012, CIMC Raffles Offshore Ltd.  delivered the 300feet Super M2 Jack-up drilling rig the Caspian Driller at OJSC ‘Krasnye Barrikady’ Shipyard (hereinafter raftered to as KB) in Astrakhan, Russia. The delivery of the Jack-up drilling rig has been made possible by the mutual hard work of the overseas shipyard and CIIMC Raffles, which indicates a leap in the general construction capability of Chinese offshore industry.

This project is not only the first offshore drilling rig finished in Russia for the past two decades, it is also the largest cooperation project between China and Russia in resource equipment manufacturing industry, a firm foundation laid for further cooperation in high-end equipments.

The Caspian Driller encompasses the total length of 59.745meters, width of 55.78meters, height of 7.62meters, and leg length of 99meters, its total weight being 8600t. There are 4 floors in the living module, which can accommodate up to 100 people. This ABS classed rig also features a heli-deck and drilling package.

The basic design was finished by Friede& Goldman firm from the U.S., while the detail and shop design was provided by CIMC Raffles. The key equipment and modules have been installed in China, then they were shipped to KB shipyard in Russia,  where the final assembly and commissioning took place.

The Caspian Driller’s construction started in August 2010, and it was financially supported by the China Development Bank. The Rig will be put into drilling operation in the Caspian Sea. 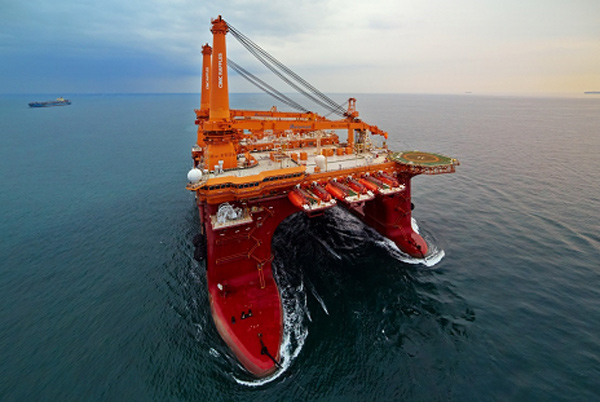