In October 2014 the first phase of the pile testing campaign for the Wikinger offshore wind farm project was launched, after the site’s geotechnical investigation on the Baltic Sea had been completed.

German engineering and services group Bilfinger was awarded the test pile contract and chose SAL Heavy Lift as subcontractor to transport and install the test piles and equipment with their DP Class II vessel MV Lone. Test objectives are to confirm the design of the wind farm foundations by testing the performance of the piles against static, dynamic and cyclic loads specific for offshore structures.

Located 30 km off the island of Rügen in the Baltic Sea and covering an area of 34 km2, the Wikinger offshore wind farm project will consist of 70 wind turbines with a total capacity of up to 350 MW Spanish energy company Iberdrola is developing the project, scheduled to begin operations in 2017.

Immediately after returning from an oil & gas related project in Angola, SAL’s main offshore installation vessel MV Lone was set up for the first phase of the pile testing campaign: Initial vessel mobilisation activities took place in Rotterdam in early September. After more mobilisation and loading of project equipment in Rostock and Sassnitz, Germany, the vessel was ready to sail for the field. MV Lone was fitted out with additional living quarters to accommodate the 75 persons necessary for the project.

Furthermore, she carried one Work Class ROV and a second observation class unit. Survey was undertaken by a third party utilising the vessel’s facilities including the vessel’s HiPAP.

The full test campaign comprises two phases with the tests being performed at three locations. During the first phase three sets of three piles were driven at designated locations to required depths. In the second phase, pile pull-out tests will be performed with the expectation of minimal movement of the piles. The purpose behind driving piles in sets of three is so that the two outer piles can be used as reaction piles while the pull force is imparted to the central pile. This pull-out test – the second phase – will be conducted 7 to 10 weeks after the piles have been installed. All these tests aim to confirm the soil integrity.

In order to accurately install the three piles in one line SAL’s client, Bilfinger, designed and constructed a purpose-built piling template as the spacing between each pile is critical to the successful outcome of the test programme. The template weighs just under 175 t whilst the piles average at 35 m length and 50 t weight.

The pile testing project was technically challenging – not only in terms of methodology design and planning, but also of engineering and ultimately, offshore delivery. The installation engineering, motion analysis, rigging and sea-fastening design were performed by the SAL engineering departments in Delft and Hamburg. Offshore rigging and lifting operations were jointly undertaken by Bilfinger’s and the vessel’s crew. This included placement of the template on the seabed and recovery, lifting, upending and stabbing of piles into the template and lifting and placing of the piling hammer and arrangement.

The installation phase has been essentially concluded with all works at sea having finalised without incidents. For the second phase of the test programme – re-striking of the test piles, along with pull-out tests –, SAL Offshore will return to the project site with MV Lone in December 2014.

MV Lone served as an exceptional project platform with her 2000 m² of clear main deck and her two 1000 t SWL cranes. From the outset, piles, template, piling hammer and all associated equipment were carried altogether, resulting in a high degree of efficiency, minimising port calls and last but not least protecting the budget. Furthermore, as a DP Class II vessel, MV Lone can be operational within a very short period of time: from arrival in the field, it takes typically no more than two hours, producing clear scheduling and cost advantages. On top, her operational speed of 20 knots further enhances the efficient services to the client.

Check out the gallery for some photos taken during the work: 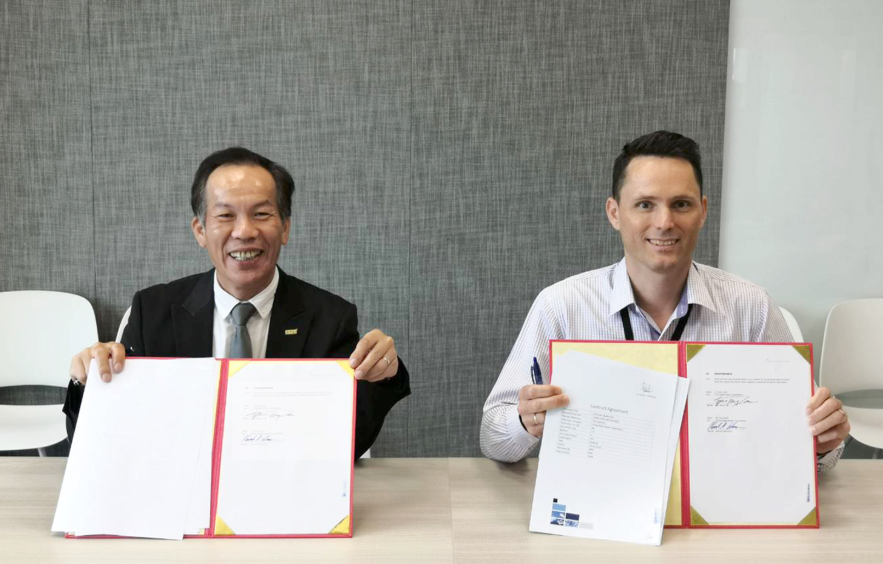