The German propulsion manufacturer Schottel has been awarded a contract to supply rudder propellers to a tug being built by Turkish Uzmar Shipyard for the Port of Aarhus, Denmark’s largest container port.

The azimuth thrusters will be driven by diesel engines.

This configuration will achieve an expected bollard pull of about 65 tonnes and a free-running speed of approximately 12.5 knots, according to Schottel.

“Not only does the tugboat have great strength, it also has significantly better manoeuvrability and thus efficiency and precision in the work it will undertake. It can assist the very large vessels arriving at Aarhus with pronounced precision, as it is delivered with an Azimuth Stern Drive system,” said Thomas Haber Borch, Chief Executive Officer at the Port of Aarhus.

As explained, the tugboat can sail on one engine as it sails back and forth to the ship to be towed, while it can use both of the ship’s engines during the actual towing.

SCHOTTEL SYDRIVE-M connects a port and starboard mounted azimuth thruster in a vessel, allowing the thrusters to be driven together by only one of the main engines.

According to Schottel, this leads to reduced operating hours of the main engines, resulting in lower maintenance costs as well as less fuel consumption and lower emissions.

The system needs no additional electronic components or a gearbox.

The new tugboat is scheduled for delivery in summer 2021. 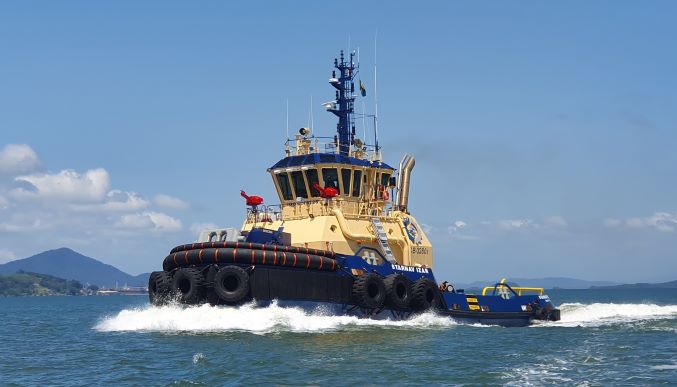