On 9 March 2021, Singapore ratified the Convention on the International Organization for Marine Aids to Navigation.

It is the first country to do so shortly after it signed the treaty on 1 March this year.

As explained, acceding to the convention will support the International Association of Marine Aids to Navigation and Lighthouse Authorities (IALA) to become an intergovernmental organisation.

Established in 1957, IALA is the international association for technical standards in marine aids to navigation (ATON), vessel traffic services (VTS) and e-navigation. Consisting of technical committees that develop common standards and practices across the maritime industry, IALA drives the harmonisation of ATON worldwide to foster safe, economic and efficient shipping. As an intergovernmental organisation, it is believed that IALA will be better placed to fulfill the crucial role it plays in facilitating marine navigation.

As a major hub port and a coastal state situated along one of the world’s busiest waterways for international shipping, Singapore has recognised the importance of IALA’s efforts to establish common technical standards for VTS and e-navigation in promoting safe and efficient shipping.

In 2018, the Asian country also signed a memorandum of understanding with IALA, which committed S$1 million over five years to support the IALA World-Wide Academy in capacity building and human resource development for IALA’s national members. Singapore is presently serving a four-year term as an elected council member of IALA.

“Over the years, the MPA has been instrumental in their active support to IALA… Their strong experience and continued innovation, especially in the domains of vessel traffic services and e-navigation has greatly assisted the work of IALA. The MPA has also been instrumental in the change of status process and is now the first state to have ratified the convention,” Francis Zachariae, Secretary-General of IALA, commented.

“Singapore supports the elevation of IALA’s status from a non-governmental organisation to an intergovernmental organisation. This will boost international participation in IALA’s activities and strengthen global cooperation and coordination in harmonising marine ATON and related services,” Chee Hong Tat, Senior Minister of State for Transport and Foreign Affairs, said.

“As an IALA Council Member, Singapore strongly supports IALA in growing its mandate to improve navigational safety and the efficiency of maritime traffic for the global shipping community.”

The convention was finalized during the Diplomatic Conference held in Kuala Lumpur, Malaysia, in February 2020. The Final Act of the Convention was signed by 50 States.

In addition, on 24 February, Pieter de Gooijer, Ambassador of the Kingdom of the Netherlands to France also signed the Convention on the International Organization for Marine Aids to Navigation. 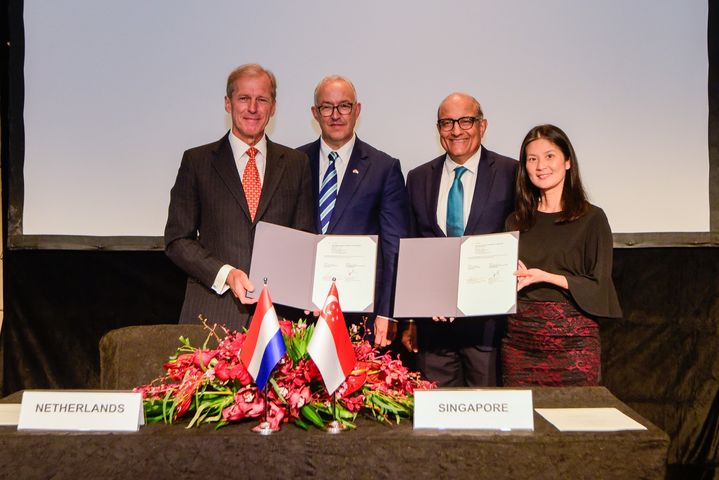