Snam, Enagás and Fluxys have inked agreements to jointly acquire a 66% interest in DESFA, a Greek operator in the natural gas infrastructure sector.

The agreements were signed in Athens on July 20 between the European consortium consisting of the three companies, the Hellenic Republic Asset Development Fund (HRADF) and Hellenic Petroleum.

Under the terms of the agreements, Snam will acquire 60%, Enagás 20% and Fluxys 20% in the Greek operator.

The consortium was awarded in April the tender for the privatization of DESFA on the basis of an offer of EUR 535 million (USD 627 million). Today’s contracts were signed following authorizations received in recent days by the European Commission and the Hellenic Court of Audit.

The completion of the transaction is expected by the end of the year, subject to several conditions.

DESFA owns and operates a high-pressure transport network of about 1,500 km, as well as an LNG regasification terminal at Revithoussa.

Thanks to the support of Snam, Enagás and Fluxys DESFA will be able to fully exploit its strategic position in the Mediterranean. The consortium also intends to promote innovative uses and new sources of natural gas in Greece to further contribute to the sustainable growth of the natural gas market, the economic development of the country and make a contribution to the country’s emission reduction process.

The consortium has secured a > 10-year non-recourse acquisition financing corresponding to approximately 65% of the enterprise value. The financing is subject to documentation and closing is expected to occur in the next few weeks.

“Snam is ready to work with its partners to accelerate the growth of DESFA and the development of Greece’s infrastructure so that the country can have a key role in the realization of an increasingly integrated, secure and sustainable European energy system, which will benefit Greek and European consumers,” Marco Alverà, CEO of Snam, commented.

“Being part of this consortium is a unique opportunity for us to contribute our know-how as TSO, together with the Greek expertise, to the security of supply and the energy transition in Europe. Greece is a strategic country for these purposes and its gas infrastructures are key to supporting a decarbonized economy and a progressing true common energy market within Europe. With today’s signing, we are a step closer to this being a reality,” Marcelino Oreja, CEO of Enagás, stated.

“Our consortium will be able to transfer technical and operational capabilities to DESFA, to develop new uses of gas such as compressed natural gas for cars, LNG for heavy duty vehicles and ships, and to introduce renewable gasses such as biomethane in order to drastically reduce the country’s emission of both harmful pollutants and greenhouse gases,” Pascal De Buck, managing director and CEO of Fluxys, explained. 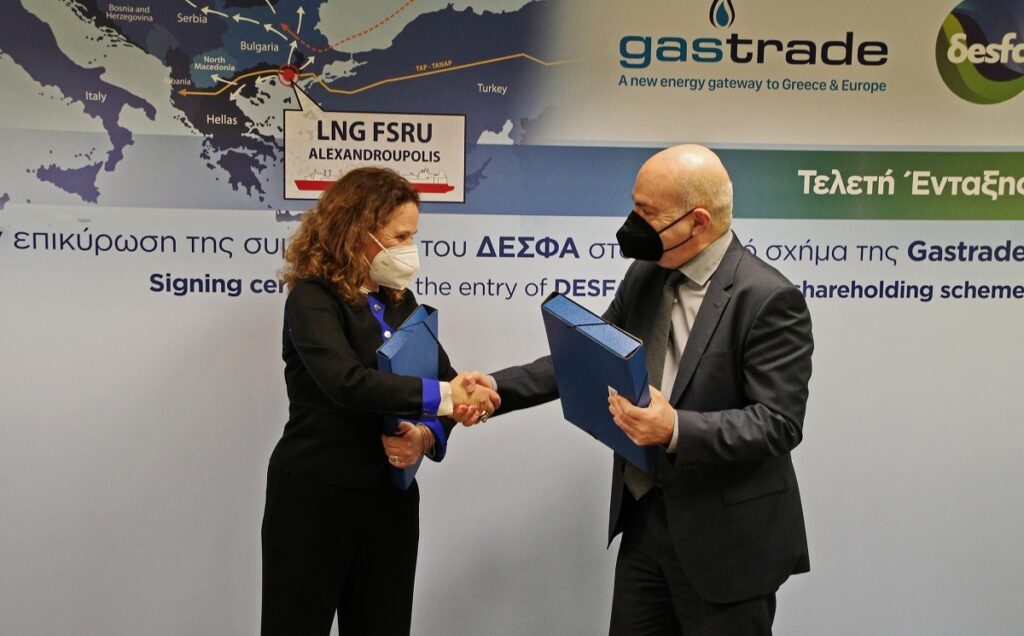