Recently the christening ceremony of Kyokuyo‘s RORO carrier S500 was held at Rotterdam, the Netherlands. Mr. Katsuhiko Ochi, president of Kyokuyo Shipyard, was invited to attend the event hosted by CLdN, which actually owns the ship as well as her sister vessels.

Rotterdam was chosen because the vessel is going to be engaged in shuttle service across the Dover Straits. For S500, it was a kind of a formal “debut” presentation, where the debutante was introduced to no less than 300 guests, including her future cargo owners. It was a joint event, too: her fellow – bigger RORO ship “Peregrine”, built at Flensburger was also named at the same occasion.

It was a rainy day, but the rain just stopped before the christening ceremony held at CLdN’s private berth. After a blessing was given by a christian priest, the vessel was named “Capucine” by Mrs. Virginie Cigrang, the better half of Mr. Michel Cigrang of CLdN group.

At the lunch reception, Mr. Christian Cigrang, CEO of CLdN, in his welcome speech, introduced Kyokuyo Shipyard president as “the guest from the most distant place” and kindly said a word of appreciation about the quality of the shipyard’s products.

Kyokuyo is now concentrating on S503 – the next and last in the 4-ship series. 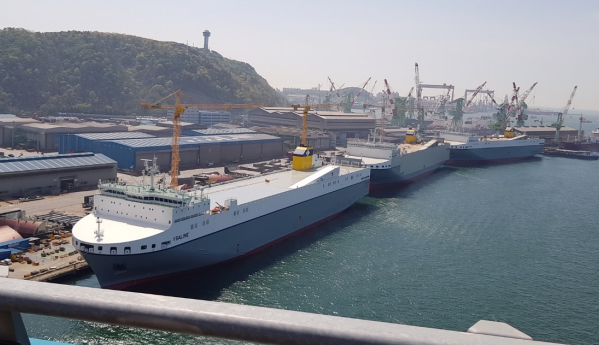